Postherpetic neuralgia (PHN) is a chronic pain syndrome associated with the reactivation of a primary infection with varicella-zoster. It is common with the intercostal nerve, which is easy to target and neurolysis. But PHN of L1 nerve dermatome is difficult to access for an isolated single nerve block. In our case, we had a 54-year-old male with severe L1 PHN (NRS pain score of 8–9/10), which was refractory to multiple drugs. A combined iliohypogastric/ilioinguinal nerve block did not produce any significant analgesic effect. We administered a transverse abdominis plane (TAP) block with a combination of local anesthetics and steroids to accomplish satisfactory analgesia. We repeated the block after 15 days to achieve an NRS pain score of 2/10 and later prescribed a minimal dose of duloxetine (10 mg once a day) only. The patient was followed up for 2 months with adequate pain relief. There were no side effects. We report this case to emphasize that fascial plane blocks could also prove fruitful in targeting specific nerves in cases of refractory PHN.

Postherpetic neuralgia is a chronic pain syndrome associated with the reactivation of a primary infection with varicella-zoster virus (VZV): the pox could be either a manifest disease or not. Its prevalence rate is 3.9–42.0/1,00,000 persons per year, occurring in up to 25% of patients over 50 years of age, and 75% of patients over 70 years of age.1 Thoracic dermatomes are most commonly involved in postherpetic neuralgia (PHN) the incidence of lumbar dermatome involvement is not being described so far.2

Conservative therapies include topical lidocaine 5% ointment, oral anticonvulsants, antidepressants, antiviral agents are the few described modes of management.3 Epidural or intrathecal injections, pulsed radiofrequency (PRF), and spinal cord stimulation are some of the not so common interventional treatment options for PHN.4 The rationale for applying neural blocks to treat herpes zoster and associated PHN is to attenuate central sensitization by interrupting the transmission of nociceptive afferent impulses to the central nervous system. Intercostal nerves can be easily targeted to inject local anesthetics or neurolytic. Targeted nerve block for L1 PHN is difficult to do. Transverse abdominal plane (TAP) block is one of the techniques of achieving postoperative analgesia after laparotomies and management of cancer pain. It blocks both the motor and sensory nerves of the anterior abdominal wall.5 The TAP block has also been used for chronic postsurgical pain.6 Hence, we attempted to use the TAP block for a case of PHN of the L1 nerve. 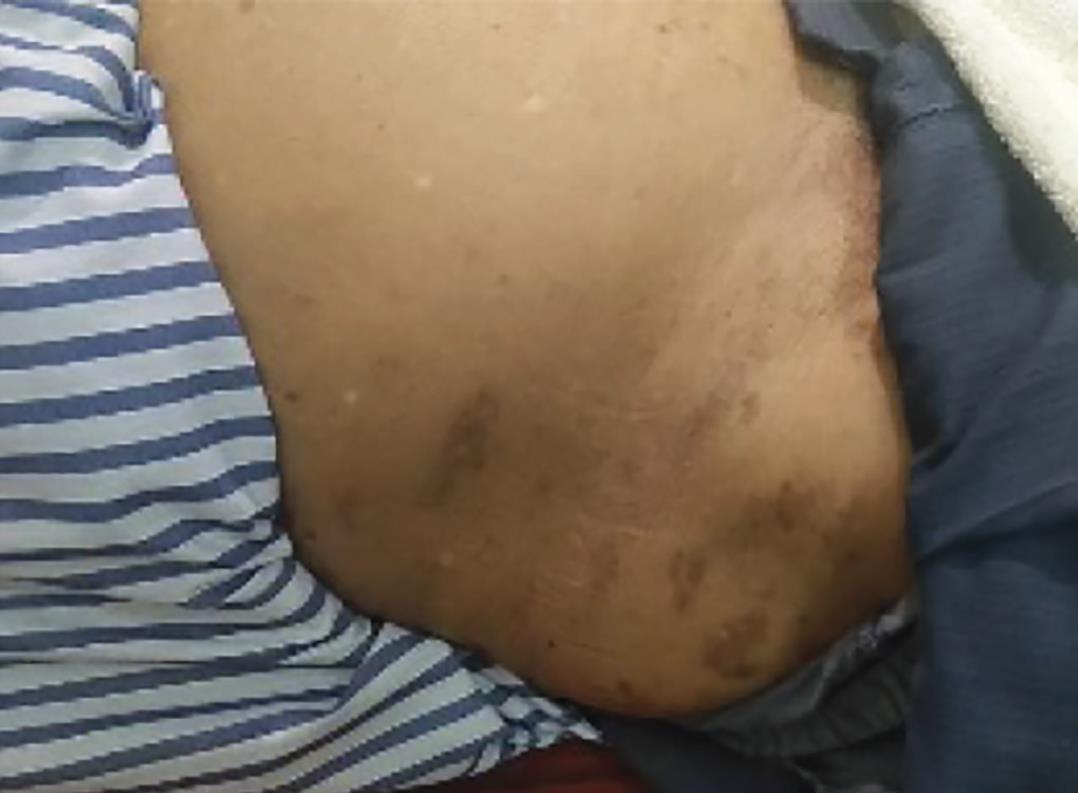 A 54-year-old male weighing 67 kg presented with a history of PHN for the past 1 year.

His NRS pain score was 8/10. Pain was not controlled with the first-line management of PHN. He was on T. carbamazepine 200 mg bd, T. pregabalin 75 mg bd, and T. duloxetine 10 mg tds. Hence with a possible L1 nerve in mind, we administered ultrasound-guided right ilioinguinal nerve block with 10 mL of 0.25% bupivacaine. Even with complete analgesia of the inguinal area, there was no change in the perception of pain. The patient continued to have persistent pain. A proper patient counseling was done for a proximal block, a few days later, an ultrasound-guided right-sided TAP block was given with 0.25% bupivacaine, and 40 mg triamcinolone made up to a total volume of 20 mL. After the TAP block, the pain scores reduced to 3/10. He was continued on duloxetine only, the other drugs being stopped. The NRS score increased to 5/10 in the next week. 15 days later, we repeated the TAP block with the same regimen. He was pain-free for the next 75 days, and he was taking only T. duloxetine 10 mg HS. His NRS score was 2/10. All three procedures were uneventful.

The VZV can become dormant in the sensory ganglia after an initial mild infection presenting as chickenpox.7 A neuropathic pain state termed PHN can develop, especially when no effective treatment was instituted.8 Early institution of the sympathetic blockade has been advocated to decrease the incidence and severity of PHN.9 Compared to systemic pharmacological therapies for PHN, this approach offers a more direct method of treating the area of possible injury. The administration of steroids in close proximity to the site of inflammation can be expected to provide a greater degree of benefit with the least amount of systemic side effects. Local anesthetic agent can offer immediate pain relief, although their effect is short-lived, while the corticosteroid can offer long-term anti-inflammatory effects.10 Studies have established the effectiveness of intercostal neurolysis in PHN.11 But our case is the L1 nerve is difficult to access. In such cases, where the targeted nerve can’t be blocked, a trial of a sympathetic block may be contemplated, e.g., a block of the ganglion impar in cases of sacral PHN.12 Even such a possibility of sympathetic targets is also not present in our case. In our case, the ilioinguinal-iliohypogastric (ILIH) block was not efficacious as an analgesic. Hence, we decided to go a bit proximally and effect a block. The TAP block is a treatment option that is mostly used to control the postoperative pain after laparoscopic surgery as well as open abdominal surgery. But we used this block to decrease pain scores. As we found the reduction of pain scores to five with a single block, we administered it again to achieve satisfactory analgesia. There were no side effects.

Administration of TAP block, repeated, if needed, with a drug combination of local anesthetics and steroids can be used as a treatment option in cases of refractory lumbar PHN.

9. Winnie AP, Hartwell PW. Relationship between time of treatment of acute herpes zoster with sympathetic blockade and prevention of post-herpetic neuralgia: clinical support for a new theory of the mechanism by which sympathetic blockade provides therapeutic benefit. Reg Anesth 1993;18(5):277–282.