Effect of Adjuvant Yoga Therapy on Craving in Participants of an Alcohol De-addiction Program: A Pilot Study

Source of support: All activities of CYTER are supported by Sri Balaji Vidyapeeth

Aim: To study the effects of adjuvant Yoga therapy on craving in participants undergoing alcohol de-addiction program at a residential de-addiction center.

Materials and methods: Thirty male patients undergoing a residential alcohol de-addiction program at the mother care de-addiction center (MCF) in Puducherry were recruited as subjects, were randomly divided into group I (15 subjects), who received Yoga therapy as per the Centre for Yoga Therapy, Education and Research (CYTER) protocol, and group II (15 subjects), who received only standard medical management, 6 days a week for 2 weeks along with their standard medical management. Alcohol Craving Questionnaire–Short Form–Revised was administered to all participants before and after study period. Data were analyzed using Student’s paired and unpaired t tests for the intra- and intergroup comparisons, respectively.

Conclusion: The findings of this study give us an indication of the positive role of adjuvant Yoga therapy in reducing craving, thus enhancing the management of alcohol dependence. We recommend that Yoga therapy could be made a regular feature in such de-addiction clinics.

With an ever increase in the production and consumption of alcohol around the world, the after affects and people getting into an alcohol addiction has increased. According to the World Health Organization, the global burden of disease attributable to alcohol and illicit drug abuse amounts to over 5% of the total burden of disease, and the harmful use of alcohol claims 2.5 million lives per year.1 There is growing concern regarding substance use disorders as relapse rates continue to remain as high as 80–95% in the first year after alcohol or tobacco cessation.2,3 Stress is also known to precipitate alcohol relapse, through a constellation of interrelated cognitive, emotional, physiological, and behavioral mechanisms. Some of these mechanisms include attentional bias toward alcohol-related cues, thought suppression, poor emotion regulation skills, and emotional reactivity leading to habitual drug-seeking behavior.4

Yoga is a transformative journey within ourselves. In “that” state, we keep on going deeper and deeper within ourselves, until we reach the “truest”/“purest” state. The “true” state is where we are in a “state of being” of the Yamas and Niyamas and the other limbs of the Rishiculture Ashtanga Yoga.5 Then, there is the concept of “Counselling” which forms the back bone of any Yogic intervention. It should happen on the first and last days of the intervention and also on a daily basis in bits and pieces. It includes both the patients and the caregivers and/or family members. This pilot study aims to evaluate the effect of adjuvant Yoga therapy on craving in the participants of an alcohol de-addiction program.

Thirty male patients who were undergoing a residential alcohol de-addiction program at the mother care de-addiction center (MCF) in Puducherry were recruited as subjects in this pilot study done at the Centre for Yoga Therapy, Education and Research (CYTER) of Sri Balaji Vidyapeeth. Chronic alcoholic patients currently in active dependence and who were willing to participate in Yoga therapy and able to perform the techniques in the protocol were included, and those having complications caused by alcohol such has giddiness, seizures, memory problem, etc. were excluded from the study. A total of 30 participants were randomly divided into 15 each in group I (Yoga therapy group; 30.40 ± 6.41 years) who received Yoga therapy as per the CYTER protocol and group II (control group 37.53 ± 5.78 years) who received only standard medical management. The Yoga therapy protocol was administered for 60 minutes daily, 6 days a week for 2 weeks along with their standard medical management. In the Yoga therapy group, one participant dropped out due to personal reasons.

Alcohol craving questionnaire–short form–revised with 12 questions in the scale of 1–7 each, was administered to all participants in both groups before and after study period. Data were analyzed using Student’s paired and unpaired t tests for the intra- and intergroup comparisons, respectively.

A consort flow diagram shows the flow of work and data collection for the study (Flowchart 1 and Table 1).

Special Bhajan session5 of 10–15 minutes 4 times in total, i.e., once every 3 days in the 2-week period was included in the Yoga protocol. Bhakti Yoga was introduced for the first time in the form of Bhajans.

Craving has been recognized as one of the significant symptoms for alcohol-related severities, and Murphy et al. concluded that craving was positively correlated with alcohol use disorder (AUD) severity, quantitative indices of drinking, and adverse consequences of alcohol abuse.6 Hartwell and Ray reported that craving prevalence using the Penn Alcohol Craving Scale was relatively low compared with Diagnostic and Statistical Manual (DSM)-5 symptoms. However, when compared with the old DSM-4 guidelines, in the new DSM-5 guideline, conversion of the sample (46, aged 21–65) led to a small increase in overall AUD prevalence.7

Results of this study support previous conclusions by Shahab et al. who reported that even simple yogic-style breathing exercises can reduce cigarette craving acutely in the laboratory setting.8 Elibero et al. concluded that cardiovascular exercise can attenuate cravings in response to smoking cues. When compared with the control group, the physical exercise group reported a decrease in craving to smoke, an increase in positive effect, and a decrease in negative effect. Those engaged in Hatha Yoga reported a general decrease in craving.9

The results of this pilot study provide scientific evidence of the potential of Yoga as a feasible adjuvant therapy in the management of craving in patients of alcohol dependence syndrome (ADS). Yoga intervention reported a significant reduction in alcohol craving levels which was the primary outcome measure in this study. Bhakti Yoga in the form of Bhajans might have influenced in bringing down the craving levels of the patients, and as there is not much study on the effects of Bhakti Yoga5 in this filed, it opens up the potential for further research. Some programs run by the Bihar School of Yoga10 and the Bhakti Center11 do claim Bhakti Yoga can reduce craving levels and help in de-addiction, and this is worth exploring in future studies. 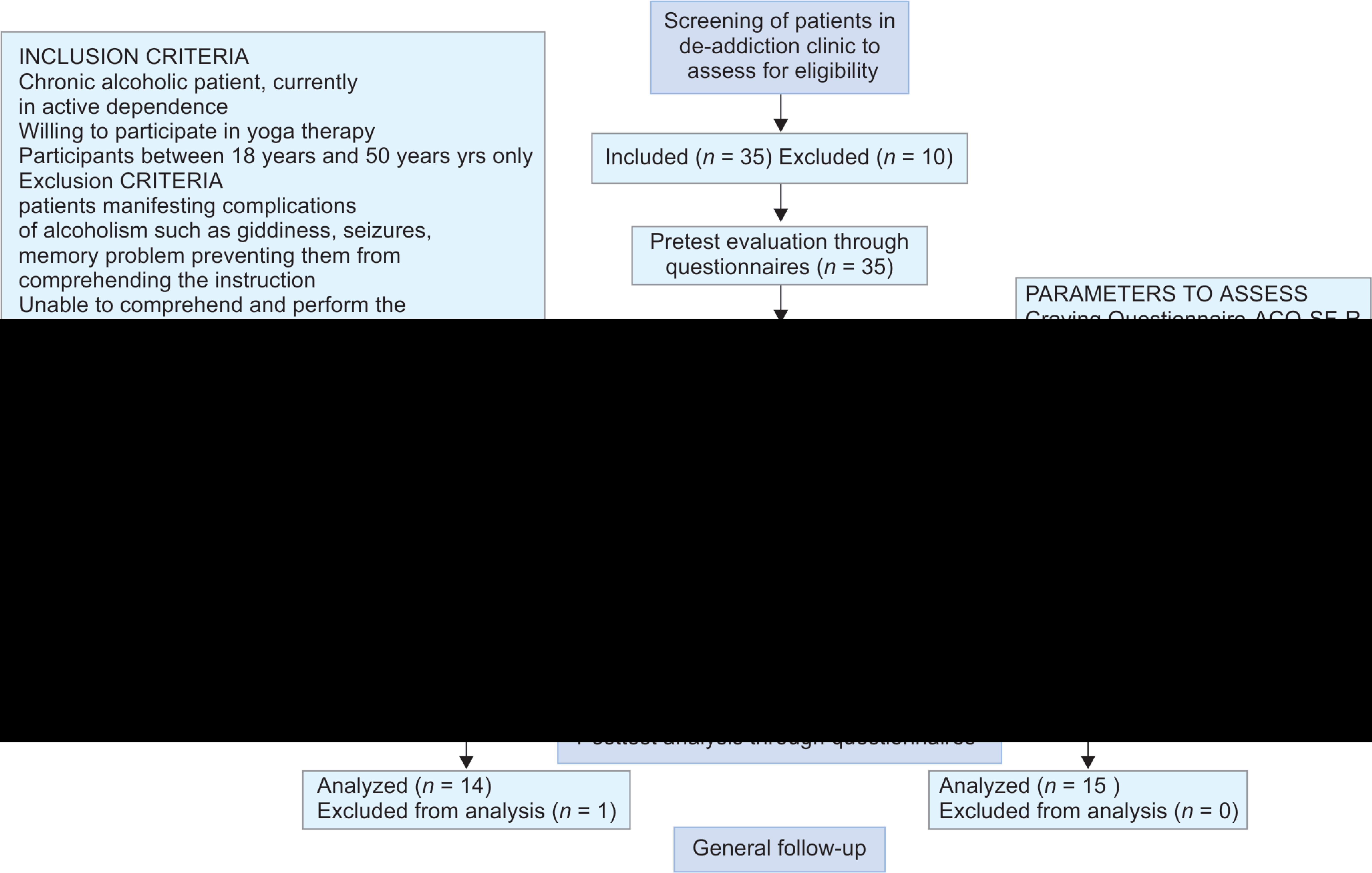 Flowchart 1: Consort flow diagram showing the flow of work and data collection for the study

The findings of this study give us an indication of the positive role of adjuvant Yoga therapy in reducing craving, thus enhancing the management of alcohol dependence. As this is a major social problem world over, such findings have potential benefits for social health among the individuals, their families, and society as a whole. We recommend that Yoga therapy could be made a regular feature in such de-addiction clinics.

If the doctors recommend Yoga therapy to the patients during the initial consultations itself (as a prescription), it binds the patient to these practices, and then, they take it seriously. The benefits of Yoga therapy are already known by way of several researches (reference section), including the current research. Hence, the standard medical management and Yoga therapy, as an adjuvant could benefit the patients toward a speedy recovery. The turnaround time being less when compared with “only” standard medication will reduce cost for the patients, and the hospital could also cater to more patients during this extra time, not to mention, the additional benefits received by the patients.

Special thanks to Mothers Care Foundation (De-addiction Centre), Kottakuppam, Puducherry, Tamil Nadu 605104, for letting this study manifest by being the place of study, being cooperative, and providing the required facilities. Thanks to the staff members of MCF who helped whenever required.