Aim: The purpose of this study is to evaluate the effect of seeding density on the growth pattern and measure the growth curve-related characteristics of two different central nervous system (CNS) tumor cells, i.e., C6 glioma cells and Y79 retinoblastoma (RB) cells.

Results: In this study, we observed that both the cell lines exhibited an exponential growth pattern at seeding concentrations of 2,000 and 4,000 through the incubation time of 120 hours. Interestingly, 8,000 and 16,000 cell densities reached stationary growth phase after 72 hours of exponential growth. However, at 24,000 cell density, the cells grew exponentially for just 48 hours before entering a stationary phase till 96 hours, beyond which cell death was observed with reduced cell count.

Conclusion: This study implicates that both C6 and Y79 cells grow best when seeded at 4,000 cells/cm2 displaying a perfect growth curve. Furthermore, the DT for both the cell lines was observed at 24–28 hours.

Primary brain tumors constitute a heterogeneous group of benign and malignant tumors from the brain to spinal cord with more than 100 histologic subtypes. They are the second leading cause of death among the individuals below 19 years of age.1 Gliomas (derived from the Greek meaning “glue”) are tumors of the glial cells, which provide nourishment to the neurons.2 World Health Organization grading system has classified gliomas into four main histological subgroups based on their levels of aggressiveness, among which grade IV glioma, known as glioblastoma multiforme (GBM), is the most aggressive and malignant grade with dismal prognosis.3 Shockingly, in the recent years, there has been just a few remedial treatments on gliomas.4 Despite the fact that analysts have proposed a few molecular pathways and an assortment of therapeutic targets for GBM, there was no achievement in the clinical preliminaries.5 This failure emphasizes the requirement of appropriate glioma animal models to carry out innovative therapeutic studies. The key factor for a successive glioma model is the proper choice of a cell line that can mimic the biological properties of human gliomas.6 C6 rat glioma cell lines developed in adult Wistar-Furth rats comprise pleomorphic population of spindle-shaped cells that can induce human GBM when injected in the brain of rats.7 A few investigations report noteworthy tumor development ranging from 70 to 91% after the implantation of C6 in Wistar rats.8 As such, several studies have been carried out using C6 glioma model to monitor tumor growth, invasion, migration, angiogenesis, blood brain barrier (BBB) disruption, and production of growth factors.9

Retinoblastoma (RB) is one of the most common pediatric cancers of the central nervous system (CNS) with an incidence of 1 out of 15,000 to 18,000 new births .10 Retinoblastoma occurs due to inactivation of the alleles of RB1 tumor suppressor gene, mainly involved in cell cycle progress, DNA replication, and differentiation leading to defective pRB protein synthesis. Apparently, loss of pRB activity results in uncontrolled tumor cell growth and proliferation and impaired cell cycle.11 The Y79 RB line, generated through explant culture of a primary tumor from the eye immediately after enucleation, closely resembles the tumor microenvironment of human disease, thereby can be employed to design new therapeutic modalities in RB treatment.12

When it comes to cancer research, in vitro studies are crucial to interpolate the mechanisms of tumor progression, treatment, and recurrence before carrying out clinical trials, simply because they provide us with infinite number of homogeneous cells13 that are capable of self-replication, and these cells, as such, can be used to study several factors related to changes in growth patterns like the impact of alkaline pH on growth of mammalian cells.14 Brain tumor cells are bestowed with a unique growth pattern such as population doubling time (DT) which is the time required for a cell population to double,15 lag time wherein cells are prepared to enter the exponential phase, and saturation density time at which cell count is maximum and the cells reach a plateau phase16 and this growth curve attributes to specific characteristics. It is anticipated that before any in vitro culture study, such cell-specific attributes should be assessed. As a typical strategy, in vitro cancer research is done at the exponential phase of cell cycle.17 Be that as it may, many researchers do not consider the impact of seeding density on the growth pattern of the cells and neglect it, which is also quite important.

To unveil that “its small things that matters the most,” we in the current study have evaluated the effect of seeding density on the growth pattern and measured growth curve-related characteristics of two different CNS tumor cells, i.e., C6 glioma cells and Y79 RB cells.

Briefly, the cells were trypsinized, mixed with trypan blue with the ratio of 1:1 and 20 μL of this mixture was placed on a Neubauer chamber. The number of live cells was counted under an inverted microscope. The cells were seeded at varying densities of 2,000, 4,000, 8,000, 16,000, and 24,000 cells/well in a 6-well plate and were incubated for different time periods such as 24, 48, 72, 96, and 120 hours. The quantification of DT as a measure of cell growth for each cell line has been carried out by counting of total viable cells (hemocytometer chambers).

The formula to calculate the % of viable cells is

All measurements were carried out by triplicate in three different replicates using analysis of variance. A paired Student’s t test was used to determine differences between control and counted cell number groups (SPSS; version: 16). A p value of <0.01 was considered statistically significant.

In the present study, we assessed the cell growth pattern of two different neuroblastoma cell lines, namely C6 and Y79 cells, so as to determine the optimal combination of cell seeding density and incubation time as measured by trypan blue dye exclusion assay.

We observed a similar linear increase in the growth pattern of C6 as well as Y79 cells by the trypan blue study (Figs 1 and 2). The DT was found to vary depending on the concentration of cells seeded at varying incubation periods. For 24 hours, the DT of 2,000 cells/well was found to be at “log phase” and also significant (p < 0.01) when compared with other cell seeding densities (Figs 3 and 4). However, 4,000 cells/well was found to exhibit significant (p < 0.01) DT at 48 hours and was also found to be at “log phase” (Figs 3 and 4). While seeding density at 8,000 and 16,000 cells/well for 72 and 96 hours, cells were found to exhibit cell death, suggesting that the cells were in “lag phase” (Figs 3 and 4). Interestingly, in 24,000 cells/well, though the DT was 24 hours, yet the cells attained “stationary phase” at 48 hours, due to excess number of cells (Figs 3 and 4). The DT was clearly observed in the cell morphology (Figs 1 and 2).

The present study exhibited the growth characteristics of two neuroblastoma cell lines, namely C6 and Y79 cells. The cell line growth patterns are applied based on the evaluation of the characteristics of cellular growth, which immediately after reseeding shows a “lag-phase.” The duration of this phase could take from a few hours up to 48 hours, the time required for a cell to recover from the trypsinization, to rebuild its cytoskeleton, and to secrete an extracellular matrix that facilitates the linkage between the cells and their propagation along the substrate. All these morphological features enable the cell to enter into a new cycle.19

Subsequently, the cells enter into an exponential growth, “log-phase,” in which the cell population doubles at a characteristic rate defined as DT (characteristic for each cell line), and also the μmax value can be defined from thereof.20 Finally, when the cell population is very dense and the substrate has practically all been metabolized, the cells enter into a stationary phase, where the rate growth drops nearly to zero.21

The present study exhibited a log linear growth pattern at all stages in both the cell lines. In both the cell lines, 4,000 cells at 48 hours were found to be in the log phase when compared with the other cell densities. In the cell density of 2,000, they were found to be in the lag phase at 48 hours and at the exponential phase during the remaining hours. However, 8,000 and 16,000 cell densities remained in the exponential phase till 72 hours and continued in the stationary phase for the remaining incubation period. Surprisingly for the cell density of 24,000, the cells exhibited an exponential growth only for 48 hours and stayed in the stationary phase till 96 hours, further incubation leading to cell death. Interestingly, in Y79 cells, at 96 and 120 hours, the cells at 2,000 and 4,000 were found to be still at the exponential phase, suggesting that the growth of cells continued after 120 hours also. In C6, a similar trend was observed, where cells at a density of 2,000 and 4,000 exhibited an exponential phase of growth at 72 and 96 hours. Hence, this study suggests that these numbers of cells are found to be enough to communicate each other and access the medium. Indeed, if the number of cells is too many, then they will be destroyed.15 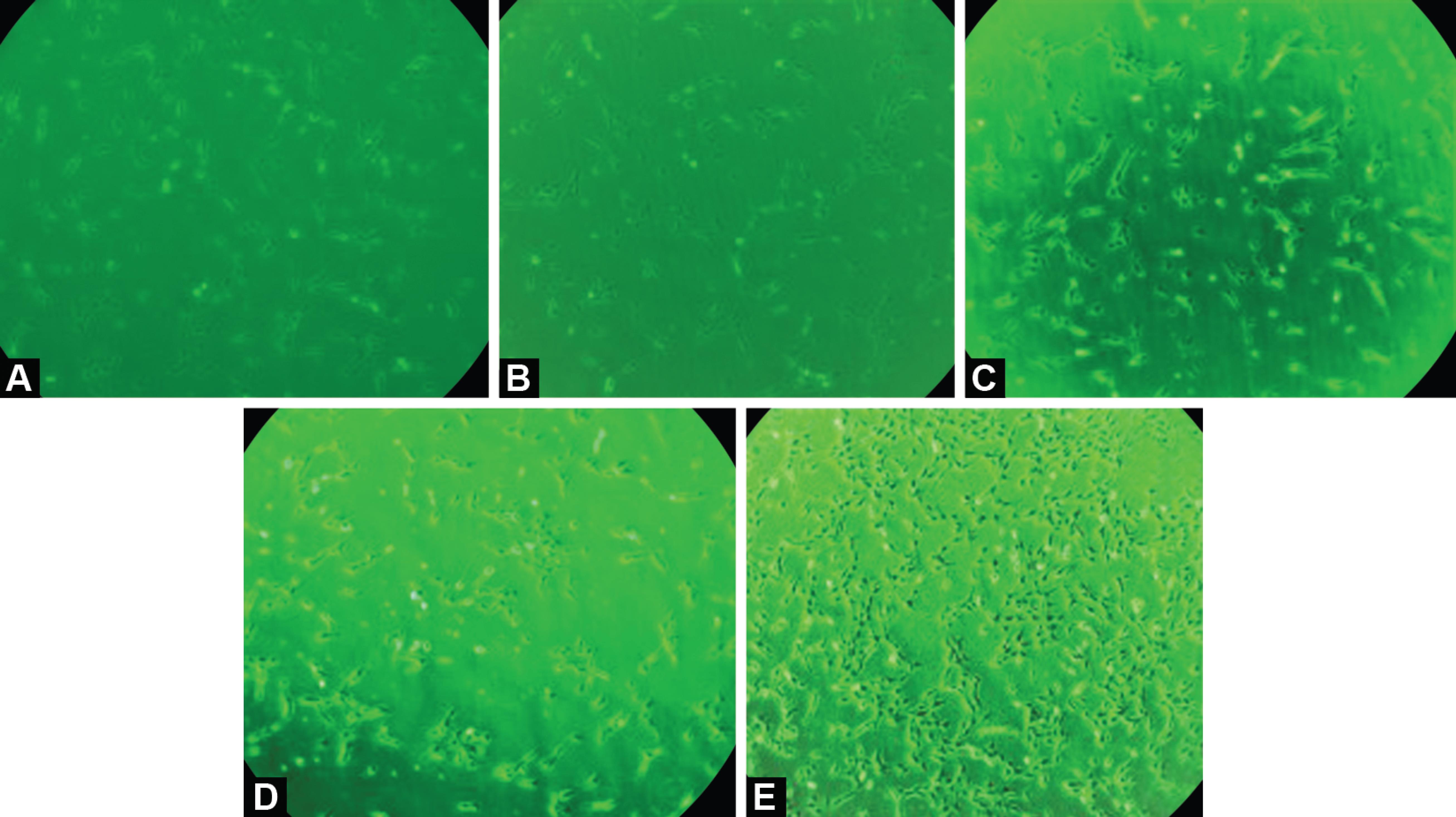 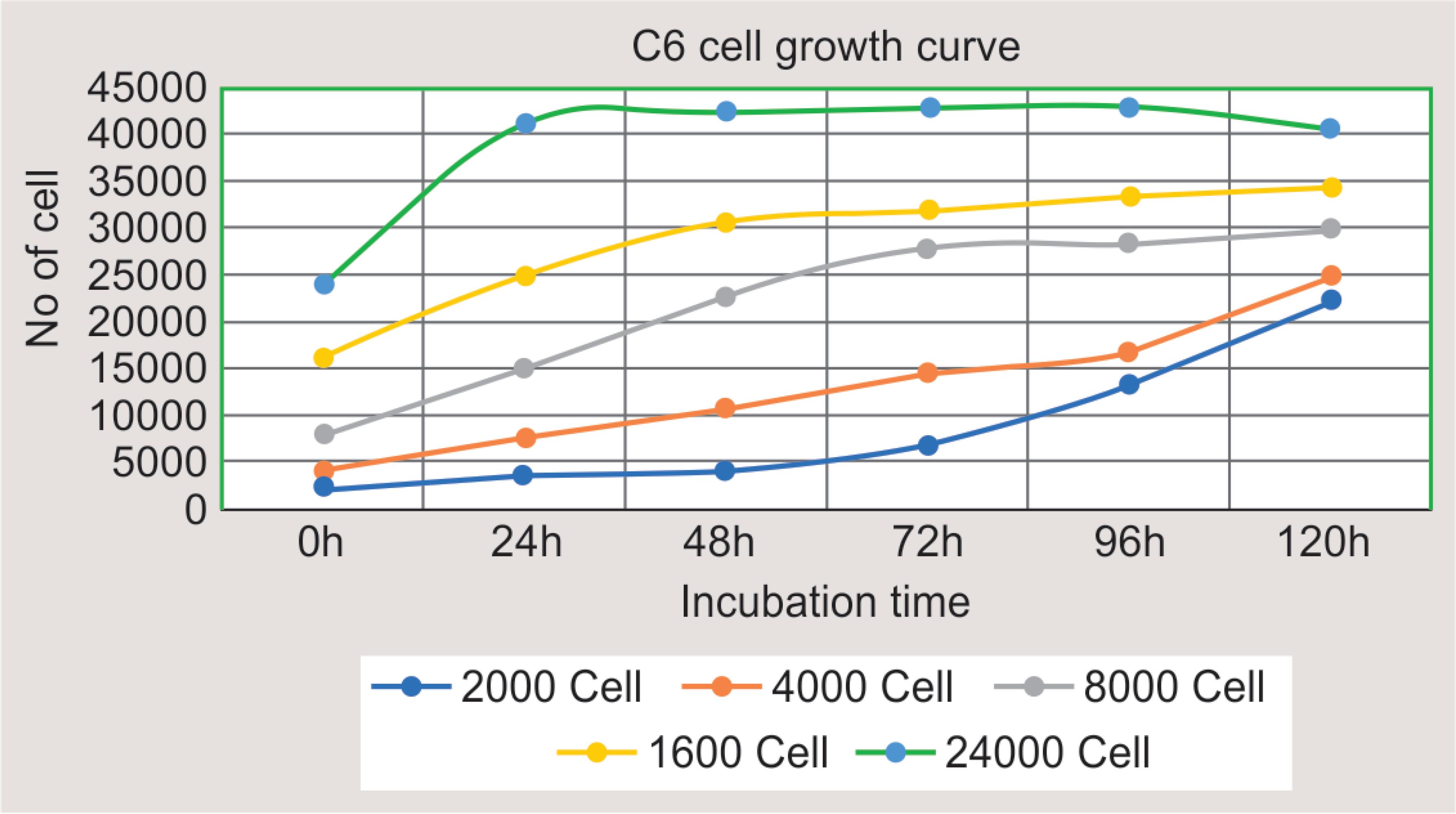 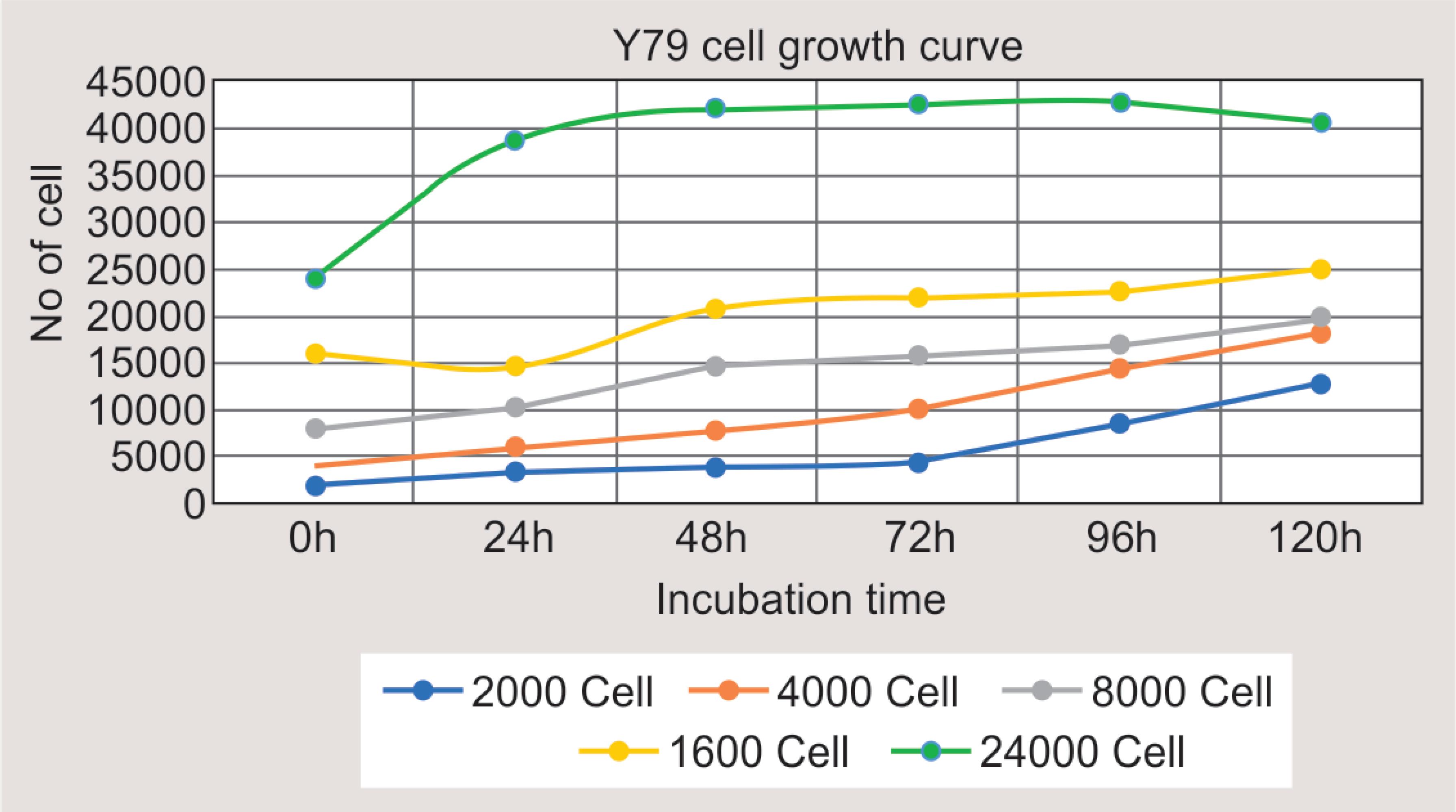 In summary, the cellular growth curves for two CNS tumors (C6 and Y79) were established, by evaluating the population of DT. This study concludes that the pattern of cell line’s growth curve is dependent on the seeding density. The growth curves that are constructed from 4,000 cells/cm2 show a more expected pattern of growth curve, which includes the lag phase, exponential phase, plateau phase, and death phase. Increasing the seeding density changes some properties of the cells. These changes are cell line specific. It is thus suggested that researchers consider the effect of seeding density before running any experiments. This study also helps to decide and choose the best cell number and do well with having prior knowledge about this cell line.