Aim: Transferrin is an acute-phase protein known to be involved in insect immune responses. In the present study, we have assessed the transcript levels of transferrin 2 (Tsf2) in various developmental stages of vector mosquito Culex quinquefasciatus.

Results: In this study, we observed an elevation in the fold change expression of Tsf2 in the larval to pupal stages followed by a decline in the fold of the adult stage. We speculate that the upregulation may be because of the microbial challenge or the aquatic stages are programmed to synthesis more Tsf2 to encounter the upcoming microbes present in the aquatic environment. However, the same should be ascertained by screening for the presence of microorganisms if any.

Conclusion: The study presents a dynamic change in the expression of Tsf2 during the developmental process of mosquito. The role of the protein in vector competence deserves further studies.

Transferrin (Tsf) is an iron-binding glycoprotein with two iron binding sites and each located within a separate and similar lobe of protein.1 In vertebrates, transferrin is predominantly employed in iron transport in the blood and finally utilized in heme production.1,2 It delivers iron to several cells via membrane transferrin receptor, which has a very low affinity toward apotransferrin, less affinity for the monoferric form, and a very high affinity for diferric transferrin at physiological pH. After binding to the membrane receptor, transferrin is taken inside the endocytotic vesicle, and iron dissociates from transferrin and is taken into the cytoplasm, while the transferrin receptor and apotransferrin are recycled in the plasma membrane, where the apotransferrin is released into the bloodstream.3 In vertebrates, serum transferrin is categorized as an acute-phase protein because, during the infection or stress condition, the level of transferrin will either rise or fall depending upon the animal host.4 For example, the human lactoferrin level is increased in plasma during infection and indicates that it might have an antibiotic role by interfering with the utilization of iron needed for pathogen proliferation.5 Similarly, ovotransferrin found in white avian eggs have protective action against the pathogen.6

Transferrin proteins, as well as complementary DNAs (cDNAs) encoding insect Tsfs, have been identified for several insect species.7 The role of transferrin and iron metabolism in insects and other organisms are studied very little, but enough information is known to indicate that there is a distinct difference between an insect and other organisms (specifically mammals). For example, insect transferrin has been demonstrated to play a vital role in iron transport and act as antibiotic agents, antioxidants, and vitellogenic protein.8 Similarly, transferrin can also contribute to the adaptation of insects to various stresses.9–11 Transferrin 1 of Aedes aegypti and Drosophila melanogaster was found to be expressed in larval, pupal, and adult stage but not in embryo, with expression in Ae. aegypti were highly in the fat body where it is secreted in the hemolymph.12,13 About this line, in most organisms, iron-containing protein ferritin is stored in the cytoplasm while insect ferritin is deficient in the cytoplasm but found in the export pathway of cell and hemolymph.14 Later, transferrin 2 (Tsf2) was founded in Ae. aegypti with low iron binding capacity due to the mutation in key amino acids in the binding site. Expression of these two genes in the adult female mosquitos differs with the AaTF1 expression elevated during 24-hour post blood meal and AaTF2 expression elevated during 72-hour post blood meal when compared to sugar-fed mosquitoes.15 Other than Tsf1, two additional putative transferrins (Tsf2 and Tsf3) were identified in D. melanogaster. Similar, in Ae. aegypti and Anopheles gambiae, three additional putative transferrin have been discovered.16 Authors have earlier reported the role of transferrin 1 (Tsf1) in the innate immune response of Culex quinquefasciatus to the filarial parasite Wuchereria bancrofti.17,18 This upregulation due to pathogen suggests that insect transferrin has a role in the vector immune system.4,12 However, to the best of our knowledge, no studies are available on Tsf2 in C. quinquefasciatus. Since the transferrin molecule could be a potential target for vector immunity the present study is designed to understand the expression dynamics of Tsf2 in filarial vector C. quinquefasciatus.

Culex quinquefasciatus egg rafts (field-collected) were placed in a tray containing tap water and incubated at room temperature, under covering conditions. The temperature of about 27–30°C provides a suitable condition for the growth of mosquito eggs. Mosquito eggs were fed with organic material for their essential growth for a certain period as prescribed by Kauffman et al.19 After 2 days, mosquito eggs transformed into the larvae stage. The larvae pass through four larval instars, and toward the end of the fourth instar, they stop eating and undergo molting to give rise to pupae. After 36 hours (at 27°C), adults emerge from the pupal stage. It took 6–8 days for their complete development. Finally, the different developmental stages of C. quinquefasciatus, such as, larvae (L), pupae (P), and adults (A) were pooled stage-wise and stored in 1 mL of trizol −80°C until further use. All the samples were collected from one generation. The difference in expression patterns between developmental stages was observed in the present study.

Vector Base and Primer Designing

Culex quinquefasciatus mosquito’s Tsf2 gene sequence was searched in the vector base site (www.vectorbase.org). A particular sequence of Tsf2 gene sequences (XM001863377.1) was obtained and these sequences were used to design primers for quantitative real-time PCR (qRT-PCR). Primer 3 online software (http://bioinfo.ut.ee/primer3-0.4.0/) was used to design the specific primer for both the gene of interest (Tsf2) and endogenous genes (β-actin).

The primers of the endogenous gene and target gene are listed in Table 1. All reactions were performed in duplicates with a standard run protocol of initial denaturation at 95°C for 30 seconds followed by 40 cycles of denaturation (95°C for 10 seconds) and combined annealing and extension (60°C for 30 seconds). Fold change between the groups was determined using 2−∆∆CT values.

The different developmental stages of C. quinquefasciatus, such as, larvae, pupae, and adults were collected and stored in a separate container. It took about 6–8 days for the complete development of adult C. quinquefasciatus from the larval stage. Early (larvae group I—1st instar) and late (larvae group II—4th instar) larvae were analyzed. Similarly, early- (pupae group I) and late-stage (pupae group II) of pupae were analyzed. Late pupae were transferred into closed test tubes. Adults upon eclosion were immediately used. (Adult insects were not maintained.) 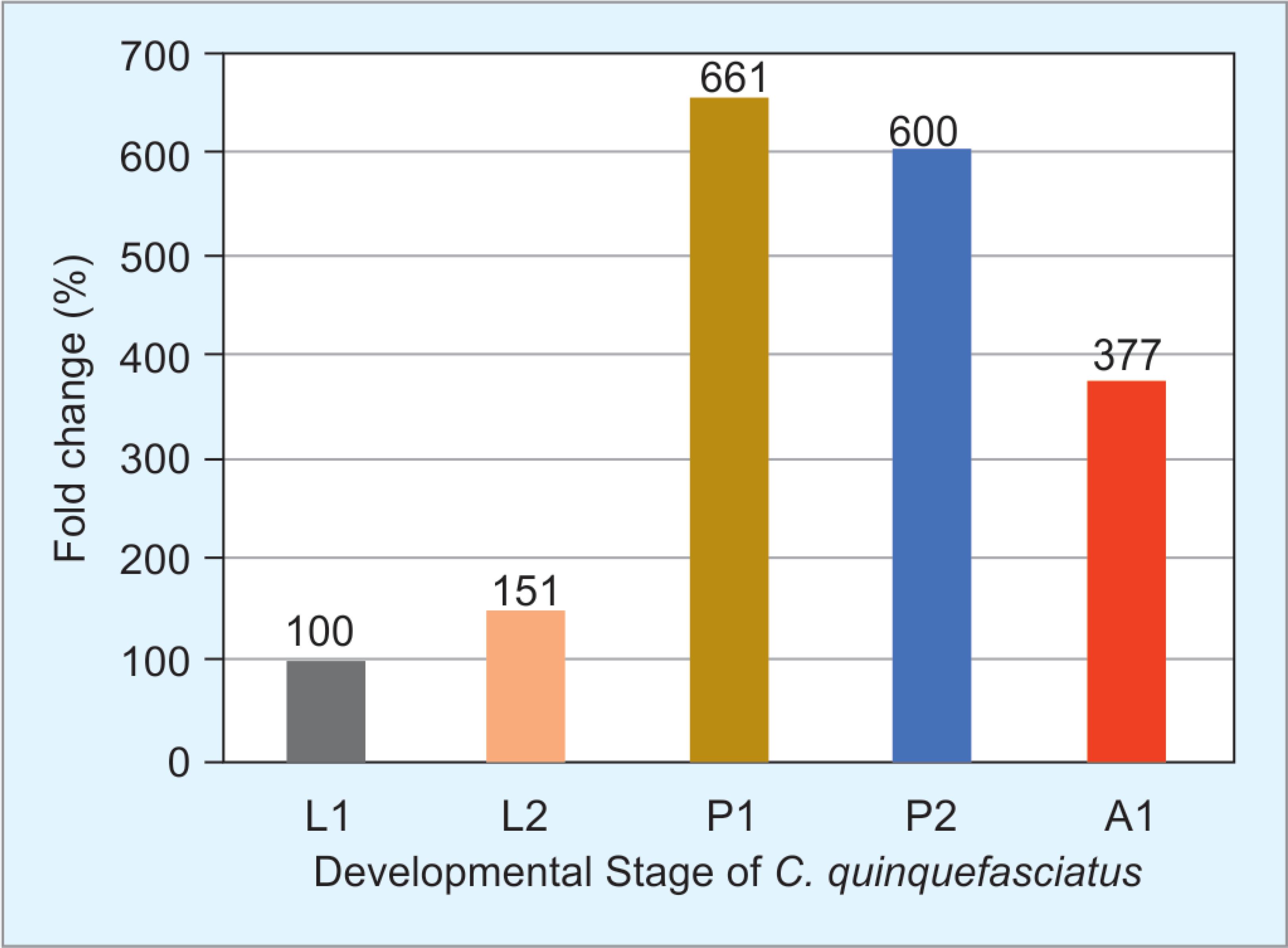 We found that the Tsf2 of C. quinquefasciatus shares 82.75, 80.73, 70.23, and 58.45% of sequence similarity with Aedes albopictus, Ae. aegypti, An. gambiae, and D. melanogaster, respectively. The multiple sequence alignment output represents in Figure 2.

We have earlier demonstrated the role of iron-binding Tsf2, lipid-binding proteins lipophorin, other effector molecules like defensins in serpins in regulating the development of filarial parasite Wuchereria bancrofti.17,20,21 The importance of these molecules in functional genomics studies in vector competence was recently reviewed.22 In this context, the present study was designed to assess the levels of Tsf2 in C. quinquefasciatus. Molecular studies on Tsf protein from several infects has shown that, like their vertebrates homolog, they are multifunctional.7 The present study exhibited the expression of Tsf2 in the different developmental stages of C. quinquefasciatus, such as, larvae, pupae, and adults (Fig. 3). The results reveal that there was an elevation in the fold change expression of Tsf2 in the larval to pupal stages followed by a decline in the fold of the adult stage as shown in Figure 1. Based on our previous report,17 we speculate that this may be because of the microbial challenge or the aquatic stages are programed to synthesis more Tsf2 to encounter the upcoming microbes present in the aquatic environment. This shows that there is a distinct role of the Tsf2 gene and iron metabolism in the different development stages of C. quinquefasciatus. Several studies reported the elevation of mosquito Tsf when treated with heat-killed bacteria and filarial worms.4,23 Later studies were done with honeybees,24 moths,25,26 termites,27 and Drosophila12 exhibit that Tsf is upregulated upon wounding and bacterial/fungal infection. Together indicates that transferrin plays a major role in vector immunity. In our result, the expression level of Tsf2 is very high in the pupal stage of C. quinquefasciatus indicates that the pupae stage may be highly resistant to bacterial/fungal infection when compared to larvae and adult stage. Similarly, the upregulation of Tsf in mosquito in blood-fed female mosquito follows closely the decrease in juvenile hormones (JH).28 This suggests that JH suppresses the mosquito TSF expression has shown in cockroaches, the bean bug (Riptortus pedestris), and honeybees.24,28–30 Together shows that transferrin is regulated by JH31,32 and JH may be one of the reasons the upregulation and downregulation of Tsf protein during the different developmental stages of C. quinquefasciatus accompanied by microbial challenges. 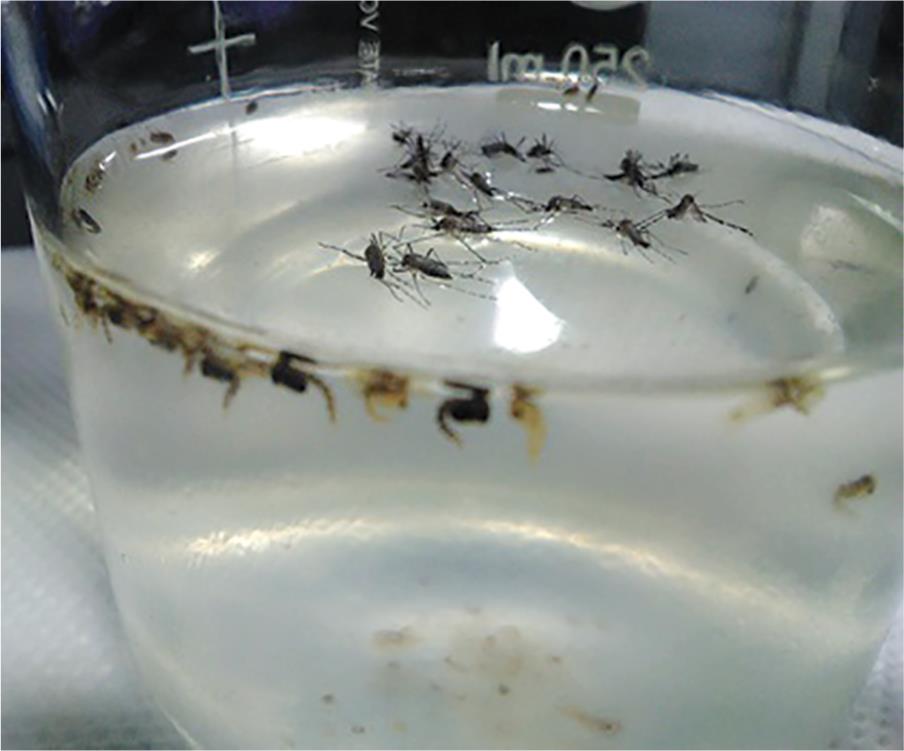 The present study showed the dynamics of Tsf2 expression in the different developmental stages of C. quinquefasciatus. The elevation in the fold change expression of Tsf2 in the larval to pupal stages followed by a decline in the fold of the adult stage may be because of the microbial challenge or the aquatic stages are programd to synthesis more Tsf2 to encounter the upcoming microbes present in the aquatic environment via JH. However, the same should be ascertained by screening for the presence of microorganisms if any. Together based on the dynamic changes in the gene expression if Tsf2 during various developmental stages shows that the protein may be involved in innate immune responses of the vector mosquito. In addition, this difference in the expression of Tsf2 in C. quinquefasciatus may be also due to a distinct role of the transferrin gene in iron metabolism. However, the precise role of this gene remains to be determined.