Assessment of Serum Electrolytes and Divalent Cation in Preeclampsia: A Comparative Study

Source of support: Sri Balaji Vidyapeeth (Deemed to be University)

Background and objective: Preeclampsia is one of the hypertensive disorders of pregnancy, which affects 8–10% of pregnancy and it is the leading cause of maternal and fetal morbidity and mortality. Due to the significant role of serum electrolyte and magnesium in blood pressure regulation, this study was conducted to evaluate its role in preeclampsia.

Materials and methods: A total of 30 subjects were recruited according to ACOG guidelines 2013 and 30 normotensive pregnant women, who were aged between 18 years and 40 years, who had referred from the obstetrics and gynecology department. Initially, 2 mL of blood samples were obtained from all the subjects and the samples were analyzed for serum magnesium by the calmagite method and electrolytes by the ion-selective electrode. The paired t test-Wilcoxon signed-rank test was performed to find if there was a significant difference between the groups. A p value of <0.05 was considered statistically significant.

Conclusion: A decrease in serum magnesium and electrolyte levels contributes to the development of preeclampsia by regulating blood pressure.

Preeclampsia (PE) is a triad of hypertension, edema, and with or without of proteinuria (clinical manifestations are taken into attention in the nonappearance of proteinuria) diagnosed after 20 weeks of gestation, which affects nearly 2–5% of pregnancy globally1,2 and it is the leading cause of maternal and fetal morbidity and mortality.3 Preeclampsia is of two types: one is early-onset that id likely to occur earlier than 34 weeks of gestation, while the other is late-onset that occurs at or after 34 weeks of gestation.3 Placenta plays a central role in PE; all through pregnancy, the metabolic demand of the fetus is increased to threefold, so exchange in uteroplacental and hemodynamics leads to the reworking of the placenta and syncytiotrophoblast invasion of the spiral artery ensures sufficient blood supply to the developing fetus.4 Meanwhile, the retrieval process begins following the elimination of the placenta.2 Given diverse research performed, the strict pathophysiology of PE remains uncertain.5,6 Studies propose that peculiar placentation, poor trophoblastic invasion, and improper spiral artery remodeling trigger the beginning of disorder.6–8 Electrolytes play a key role in the functioning of vascular smooth muscle7 and magnesium indicates a starring role in blood pressure regulation by way of monitoring vascular tone and structure through its effects on myriad biochemical reactions (e.g., Cofactor, Na/K+ ATPase).8 In addition to the above, alteration in angiogenic and inflammatory markers regulates vascular contraction, cellular differentiation, immune maladaptation, and apoptosis.9,10 Magnesium deficiency causes platelet aggregation, endothelial dysfunction, oxidative stress, and insulin resistance.11 Hence, the present study probes into the evaluation of serum electrolyte and magnesium levels in PE and normotensive pregnant women.

A comparative cross-sectional study was carried out in the Departments of Biochemistry and Obstetrics and Gynecology, Mahatma Gandhi Medical College and Research Institute, Puducherry, after obtaining clearance from the institute ethics committee. The study was conducted between January and July 2017 in South Indian population and the study subjects were recruited from the outpatient and inpatient department after getting a proper informed consent.

Thirty diagnosed cases of primiparous PE subject and 30 normotensive pregnant women who do not have any complications, aged between 18 and 40 years, were included.

According to ACOG guidelines (2013), PE is defined as new onset of hypertension with a systolic blood pressure of 140 mm Hg and diastolic blood pressure of 90 mm Hg or greater on two occasions at 4 hours intervals after 20 weeks of gestation and proteinuria of ≥300 mg/24 hour urine collection or dipstick reading of 1+ or in the absence of proteinuria, new onset of hypertension with any of the following: diminished liver function, thrombocytopenia, renal dysfunction, pulmonary edema, and cerebral or visual disturbances.12

Total 2 mL of the blood sample was collected under an aseptic condition in a red-stoppered tube for electrolytes, and samples were centrifuged at 3,500 rpm. Biochemical parameters were estimated based on IFCC-approved methods. All assays were carried out on a fully automated chemistry analyzer. Serum sodium, potassium, and chloride were estimated by the electrolyte kit method (ion-selective electrode) technology, and serum magnesium by the calmagite method.

The SPSS19 free trial version was used for statistical analysis. Descriptive statistics were expressed as mean and SD for demographic and anthropometric parameters. The paired t test-Wilcoxon signed-rank test was performed to find a significant difference between the groups. A p value of <0.05 was considered statistically significant.

A total of 60 subjects were enrolled for the study, and they were 30 in each group. Table 1 shows the demographic characteristics of the study participants. There were no differences in terms of maternal and gestational age between case and control groups. Significant differences were noted with regard to systolic and diastolic blood pressure between study participants.

Preeclampsia a placental disease and it gets resolved when the placenta is removed. Though the exact pathophysiology of PE is not clear, various risk factors are concerned in the improvement of the disease; the principal risk factors are obesity, history of PE, pregestational diabetes mellitus, chronic hypertension, and antiphospholipid antibody.13,14 This present study was carried out to evaluate the serum levels of sodium, potassium, chloride, and magnesium among PE and normotensive pregnant women. 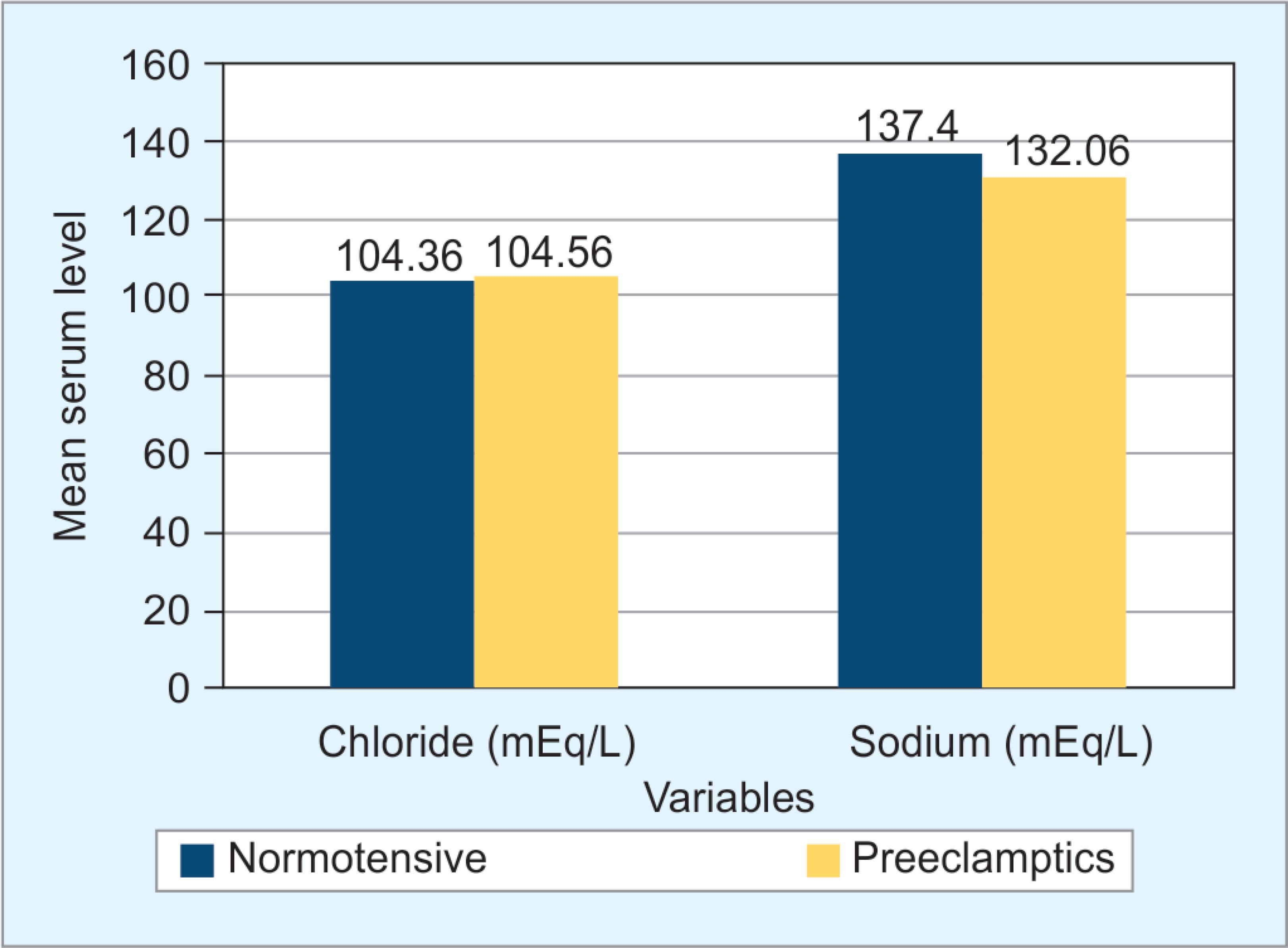 Fig. 1: Comparison of serum sodium and chloride levels in normotensive and PE group

Sodium plays a vital role in maintaining the extracellular fluid volume and osmotic activity and its levels are primarily regulated by the hypothalamus, adrenal gland, and kidneys.15 In this study, the mean serum sodium as well as serum potassium levels were considerably reduced when compared to normotensive pregnant women and the results were in accordance with an earlier study conducted by Darkwa et al.16 According to Mishra and Kametas et al., electrolyte levels do not show any change in PE patients.7,18 There are two mechanisms by which sodium affects blood pressure. Surplus sodium intake leads to plasma volume expansion both intracellularly and extracellularly resulting in increased blood flow and cardiac output, which leads to peripheral vascular resistance. The above theory postulates an increased endothelial damage, and sodium and water retention leads to angiotensin production. Decrease in plasma volume triggers the baroreceptors to release an antidiuretic hormone (ADH) causing water retention resulting in a low sodium level, which appears to be blameable for PE.15

The role of electrolytes in the etiopathogenesis of PE is still unclear. Enormous studies have been conducted to elucidate the sequence of events.17–19 Hypokalemia in the pregnancy is very serious because it can cause cardiac arrhythmia, biological changes in the kidney, and it can even cause diabetes by decreasing insulin levels. The Na+/K+ ATPase pump plays a vital role in the transport of sodium and potassium across the cell membrane to maintain blood pressure. Pregnant women exhibit hypokalemia during the second trimester of pregnancies because of plasma volume expansion.17 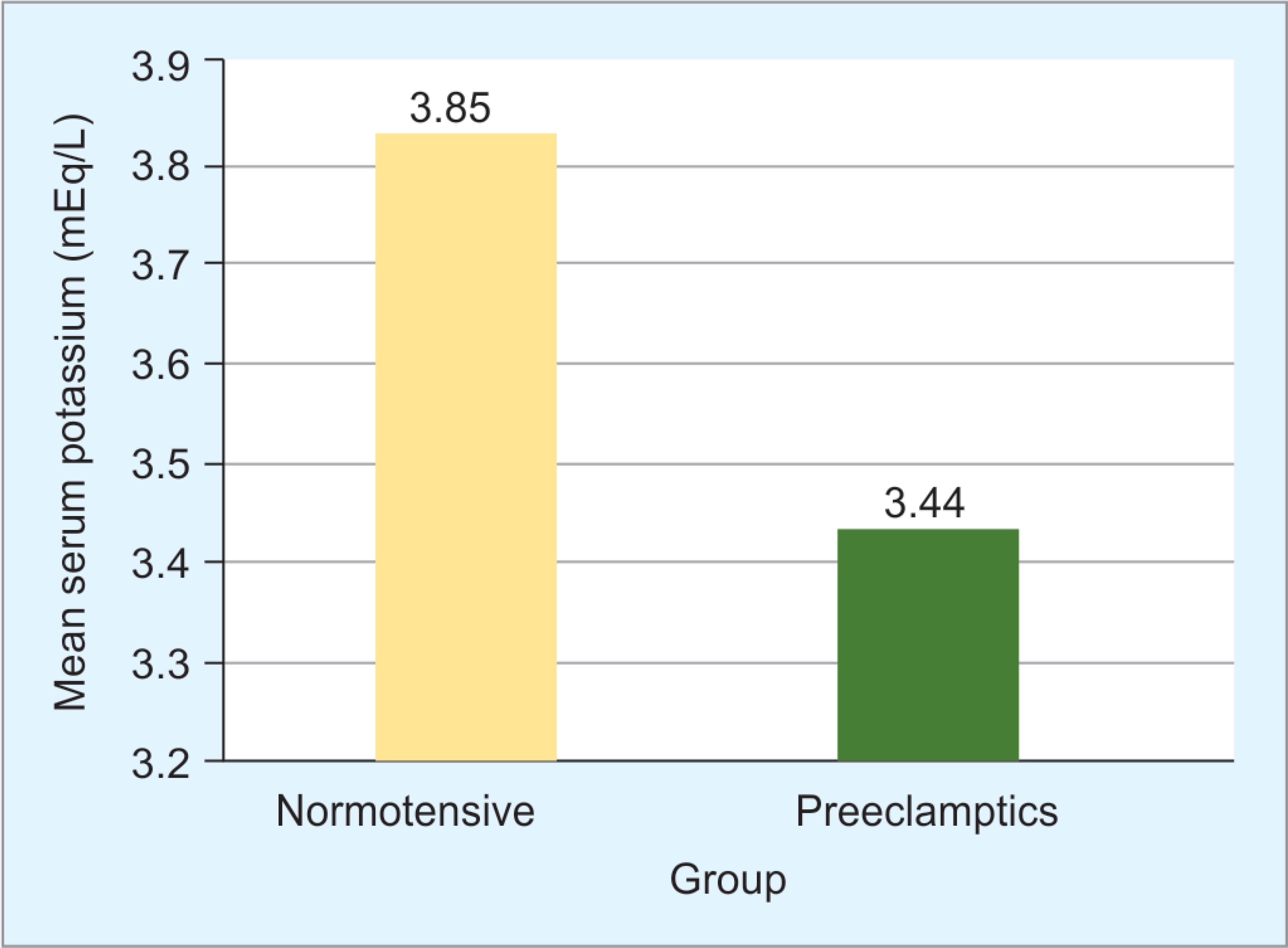 Mineral deficits like zinc, magnesium, calcium, etc., have been recognized to cause serious health issues for women of reproductive phase, because of increasing demand for growing fetus.20 In this present study, we observed significantly reduced serum magnesium level (1.50 ± 0.31) in women with PE when compared to normotensive pregnant women (1.85 ± 0.23) This is similar to the study carried out by Patel,8 Darkwa et al.,5 Archana et al.,21 and Narayana et al.22 Similar study directed by Tavana20 estimated the serum magnesium level during 18–22 weeks and after diagnosis of PE (30–35 weeks). They observed that serum magnesium was decreased with increasing gestational period. Magnesium has got an important role in the causation of PE. If identified in the initial stage, supplementing with magnesium might improve the clinical condition of patients.

In view of above observations, it can be concluded that serum sodium, potassium, and magnesium are significantly decreased with increased blood pressure. Lowered levels of above parameters contribute to the development of disease in association with physiologically induced oxidative stress. Early identification of electrolytes and magnesium disturbances may help in the management of PE.

This study did not include angiogenic and oxidative stress markers in PE. It will give better results if the above parameters are measured in three intervals (first trimester to third trimester of pregnancy) in a large population. 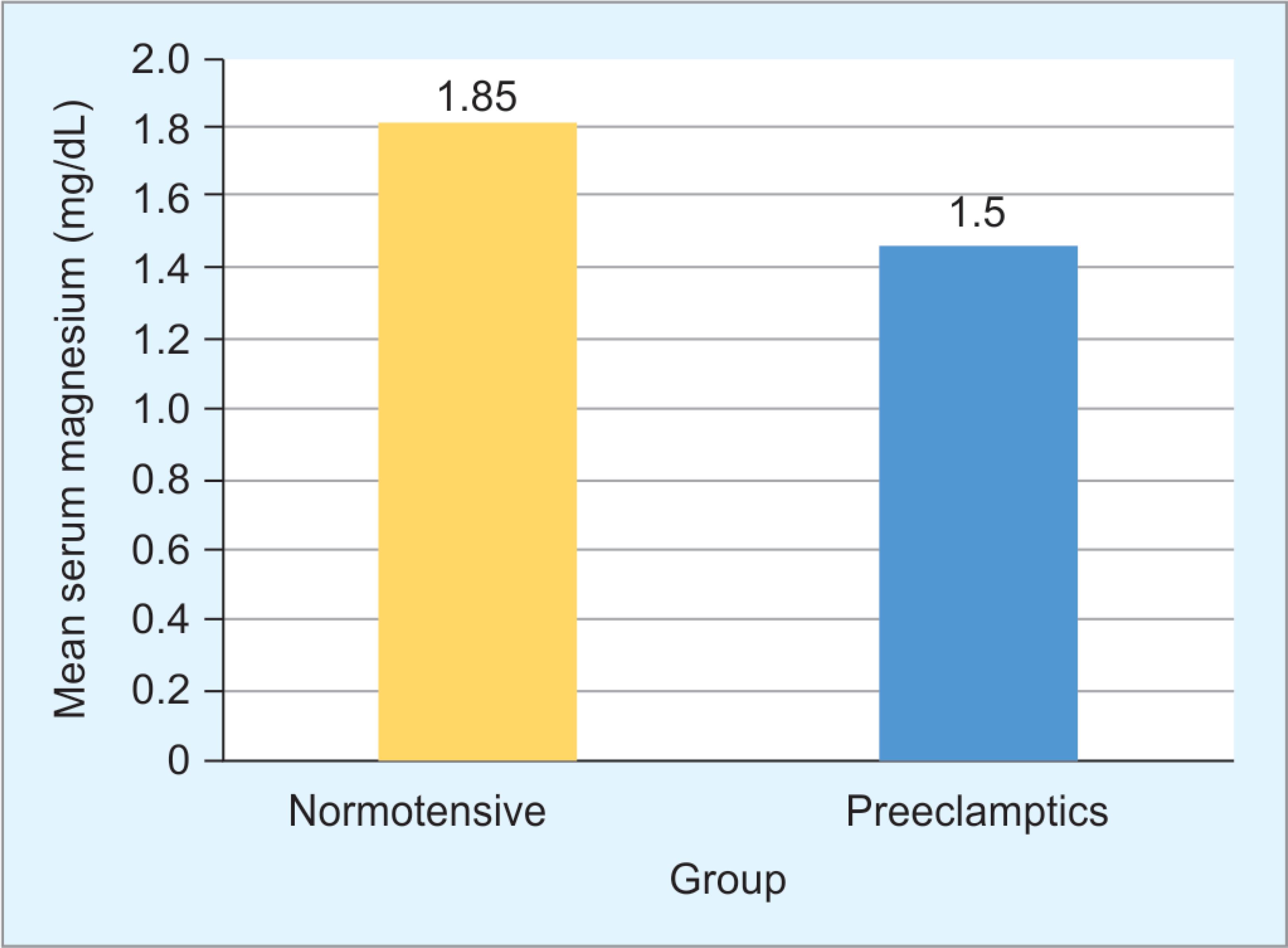 Fig. 3: Distribution of serum magnesium level between case and control