How to cite this article Kumar R, Chandrasekaran A, Kukreti R, Subramanian B. Identification of the Single Nucleotide Polymorphisms and their Frequency Present in the Targeted Region of POR Gene in South Indian Population. J Basic Clin Appl Health Sci 2020;3(4):158–163.

Source of support: This study was funded by Dr Vany Adithan Research Fellowship and supported by Sri Balaji Vidyapeeth (Deemed to be University).

Background and objectives: Cytochrome P450 oxidoreductase (POR) gene act as an electron donor to other microsomal cytochrome P450 (CYP) enzymes. This study is attempted to identify the POR genetic variants present in the proximal promoter region, hotspot coding regions that affect the function of POR gene, and the 3′UTR region encompassing miRNA binding sites among the South Indian population.

Materials and methods: Blood samples were collected from 110 south Indian subjects. Genomic DNA was isolated from whole blood and the target regions of the POR gene were amplified using specific primers. The PCR amplicons were sequenced by the Sanger method. The variants present in proximal promoter region, exons (9, 10, 11, and 12) with boundary regions around 100 bp region and 3′UTR region, were analyzed. The microRNA database (miRDB) prediction tool was used to analyze miRNA binding regions in the 3′UTR region.

Conclusion: The frequency of POR gene polymorphisms is reported for the first time among the South Indian population. This study provides fundamental and useful information on POR pharmacogenetics among this population, which can be utilized for future research.

The human NADPH cytochrome P450 oxidoreductase (POR) gene is present in the chromosome number 7q11.2, which is approximately 72 kb in size and consists of 15 protein-coding exons, with one untranslated exon.1 The POR enzyme regulates multiple metabolic processing enzymes involved in the drug metabolism, steroidogenesis, and also xenobiotics.2,3 The POR gene is highly polymorphic and exhibits a number of variations among the individuals, which are highly responsible for the altered drug metabolic reactions that are observed in diseases like Antley-Bixler syndrome, polycystic ovarian syndrome, cytochrome P450 oxidoreductase deficiency (PORD), and congenital adrenal hyperplasia.4–7 The POR protein consists of 680 amino acids with four domains namely, flavin mononucleotide (FMN), flavin adenine dinucleotide (FAD), hinge domain and nicotinamide adenine dinucleotide domain.8,9 Flavin moieties act as a cofactor for the catalytic activity of the protein.10,11

The crucial function of the POR protein is to donate electrons through a series of reactions to many other CYP enzymes for their proper biological activity.12,13 The single nucleotide polymorphisms (SNPs) present in the gene may lead to structural and functional variation in the protein and also alters the drug metabolizing activity among the individuals.14 Each and every individual shows the differences in the drug response, which can be attributed by the variability in the DNA sequence of the POR gene both in exons as well as introns.15 Variations present in the intronic region have the potential to induce or reduce the splicing mechanism efficiency.16 The proximal promoter region of the POR gene is present immediate to the upstream of exon 1U, showing various effects of the altering hormone level in case of polymorphisms.17,18 The 3′UTR region plays an important role for binding the miRNA, to enhance the gene expression and translation process.19 Some of the SNPs in this region may inhibit the binding specificity of the miRNA.20

The worldwide study reported that the majority of protein-altering variants and disease-causing variants fall in the hotspot coding regions. The risk variants Ala287Pro and Arg457His were associated with Antley-Bixler syndrome (ABS) and the breast cancer risk was located within the region of exon 9–12 in other population.21,22 This study is attempted to assess the frequency of polymorphisms in selected regions (exon 9–12), promoter region, and 3′UTR region of the POR gene among healthy individuals of South Indian population.

The study protocol was approved by the institutional human ethics committee and a written informed consent was obtained from the participants who satisfied the eligibility criteria.

The volunteers were of South Indian origin residing in Tamil Nadu, Kerala, Karnataka, Andhra Pradesh, and Puducherry for at least last three generations. The participants were selected with the result showing normal hematological and biochemical parameters like random blood sugar, hemoglobin, lipid profile, renal function, and routine urine test. Severe and complication illnesses like hypertension, diabetes mellitus, and asthma patients were excluded from the study. Pregnancy and lactating mothers were also omitted.

The sequencing of PCR products was performed by Macrogen Inc. (South Korea). The derived electropherogram (Fig. 1) was manually evaluated and confirmed by the sequence with the nucleotide BLAST. The NCBI genomic DNA NC_000007.14: 75914700–75986855 FASTA sequence was used as a reference to analyze variants. The identified intronic variants are numbered according to the NCBI reference sequence, and exons were identified from the initiation codon ATG (A is considered as +1).23 Gene sequence ID 5447 were used to predict the miRNA targeted region in the 3′UTR region. The miRDB (http://mirdb.org) online bioinformatics tool was used to predict the miRNA binding site in the 3′UTR sequences. 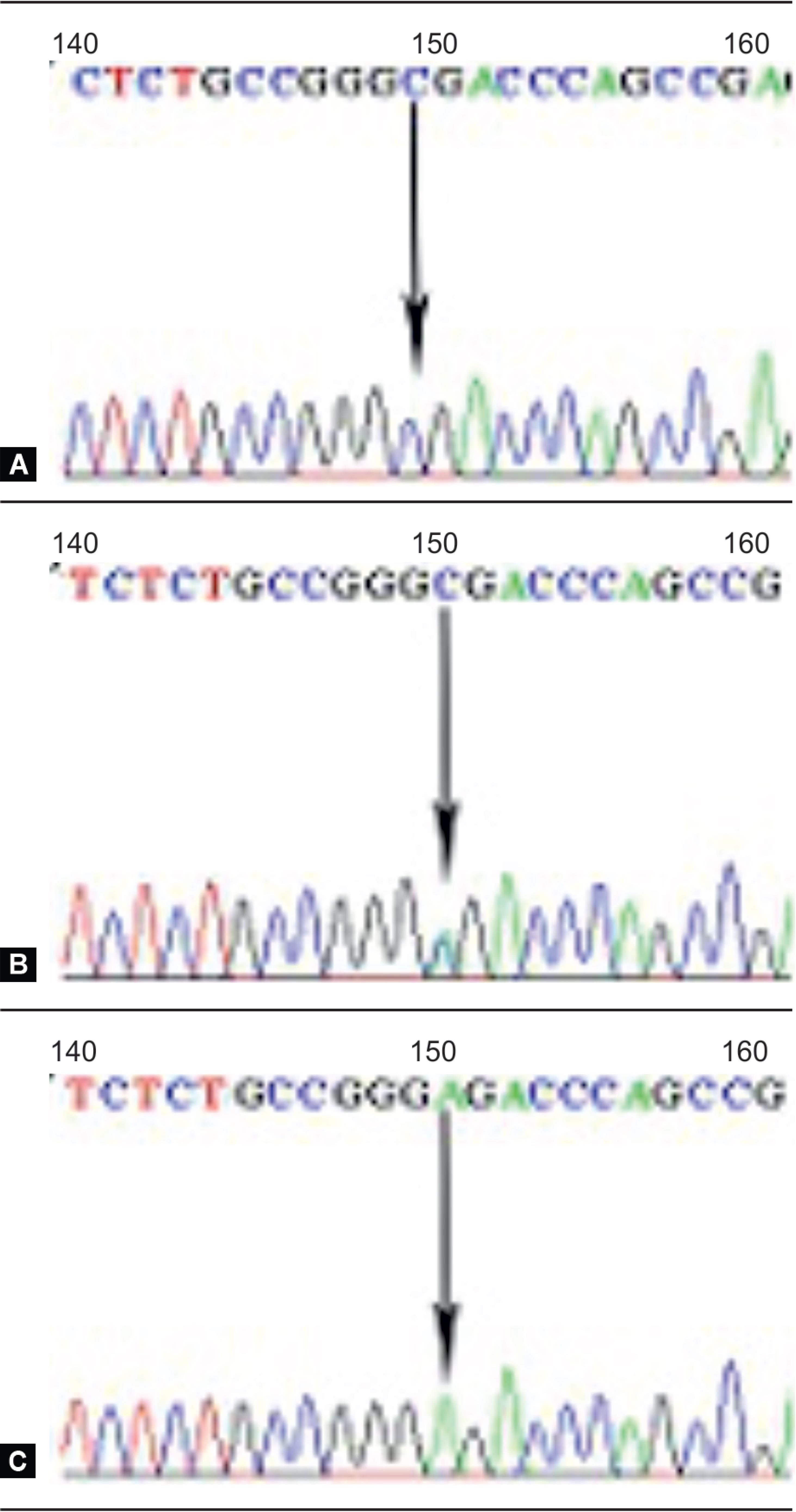 Figs 1A to C: Electropherogram shows that the SNP changes in the sequence of the POR gene. The black arrow indicates the SNP change: (A) Wildtype alleles CC; (B) Heterozygous alleles CA; (C) Variant alleles

The linkage disequilibrium analysis was performed for all 15 SNPs obtained in the South Indian population across the POR gene-targeted regions (Fig. 2). The red color indicates the relatively strong linkage among the SNPs. The r2 value is considered as a guideline for the linkage between a pair of single nucleotide variations and D′ is indicated to determine the probability for the previous recombinations. According to the r2 value, the perfect linkage was found between the SNPs rs2286822 and rs2286823 (r2 = 1; D′ = 1). The SNPs between rs4732515 and rs4732516 relatively show strong association by the value r2 = 0.8; D′ = 1. The value D′ = 1 indicates that the SNPs were strongly linked between both the pairs rs41301394 and rs2286822; rs41301394 and rs2286823, whereas the r2 = 0.1 exhibited weak linkages.

In this study, we have found SNPs only in the intronic region, hence no SNPs were found in the exonic hotspot/protein-coding regions of the POR gene.

In recent years, there has been a huge pharmacogenomics interest on POR genetic variants. The POR gene polymorphisms have acquired great attention among researchers, due to their involvement in differential response to cytochrome-mediated drug metabolic activity, steroidogenic metabolism, and they are also indirectly associated with protein expression activity. In this study, we screened the SNPs present in the transcription start site of around 361 bp of untranslated exon (−325/+36). POR −173C %3E; A was found in the basal promoter region at a minor allele frequency of 2.7%, compared to other American populations showing that the Mexican Americans 3.1% is closely related to the South Indian population (Table 4).25 The upstream SNP of POR −173 C > A has been reported to be negatively associated with the warfarin dose and reduces the gene expression in different ethnic groups.26 The functional polymorphism of the POR proximal promoter variant −152 C > A is present at the AP-2 activator protein site, while the effect of the variant remains unclear till today.17 TFSEARCH (http://www.cbrc.jp/research/db/TFSEARCH.html) online tool showed that the putative binding domain (eg: homeodomain factor NKx2.5) present in the proximal promoter region of the POR gene.18 In connecting that, reports to neither of the two promoter region SNPs had an impact on the transcription of a 325-bp POR basal promoter in reporter gene assays.17 According to the study of Ningwu Huang et al. in the year of 2007, they screened the SNPs present in POR gene among 842 individuals of four different ethnic populations. Majority of the protein-altering SNPs identified in the exonic region of 8th to 14th were highlighted in various population.23 Hence, the 9th to 12th exons were considered as a hotspot region, while the variants Ala287Pro and Arg457His associated with ABS and breast cancer risk variant also fall within this region.21,22 The primers were considered for the hotspot region based on the research article by Huang et al. The sequenced results were analyzed with the FASTA sequence from the UCSC genome browser template, recently updated version of POR gene human assembly [Dec. 2013 (GRCh38/hg38)]. This showed that the region sequenced was not present in the 8th exon. Our ultimate aim is to find the frequency of POR gene variants in South Indian population, while the common variant Ala503Val in exon 13 was already reported in this population with their respective frequency.27 In exon 14, only one variant Tyr607Cys was previously reported in the study with the lower frequency of 0.002 in Caucasian American.25 Hence, the exon 13 and 14 has been excluded from the study. In Chinese population, three intronic variants (rs2286823, rs41301394, and rs2302429) were found to be associated with the altered CYP1A2, CYP2C19, or CYP3A4 enzyme activities, whereas in our population, the SNPs (rs41301394 and rs2286823) have been found with the MAF of 31.36 and 23.63%, respectively, which gives a hint for further pharmacogenetic research.28 The polymorphism of the Leu577Pro and rs41301427 (G > A), in other population, was associated with the decreased POR protein activity, but not in the other P450 enzyme activities.29 In the present study, we found that MAF of the SNP (rs41301427) exhibited as 14.54% in the South Indian population, which is considered as statistically significant, according to HWE.30 Henceforth, further studies need to be conducted in order to confirm the association of Leu577Pro and rs41301427 (G > A) in the South Indian population, which might bring about decreased POR activity. The SNP rs2286822 (C > T) heterozygous sample in Chinese population liver sample shows the decreased level of mRNA expression as compared as homozygous mutant and the rs2286822 and rs2286823 produce higher protein content while comparing with homozygous allele.31 The SNP rs2286822 was majorly associated with the congenital adrenal hyperplasia patients caused due to 21 hydroxylase mutations.32 According to our study, four SNPs (rs72553972, rs13223707, rs13240147, and rs4732516) were not following HWE, hence a larger sample pool may be required further to calculate the minor allele frequency. The variant associated with the ABS, Arg457His, was absent in our population. There has been an association of both intron and exon variants, which are involved in drug metabolism, majority of variant association with drug metabolism present in the POR gene remains unclear. The therapeutic effects of drugs, influencing the knowledge of POR pharmacogenomics, would help both doctors and patients to choose the proper medication and regimen, and provide better guidance for personalized medicine and reference for treatment of disease in clinic.33 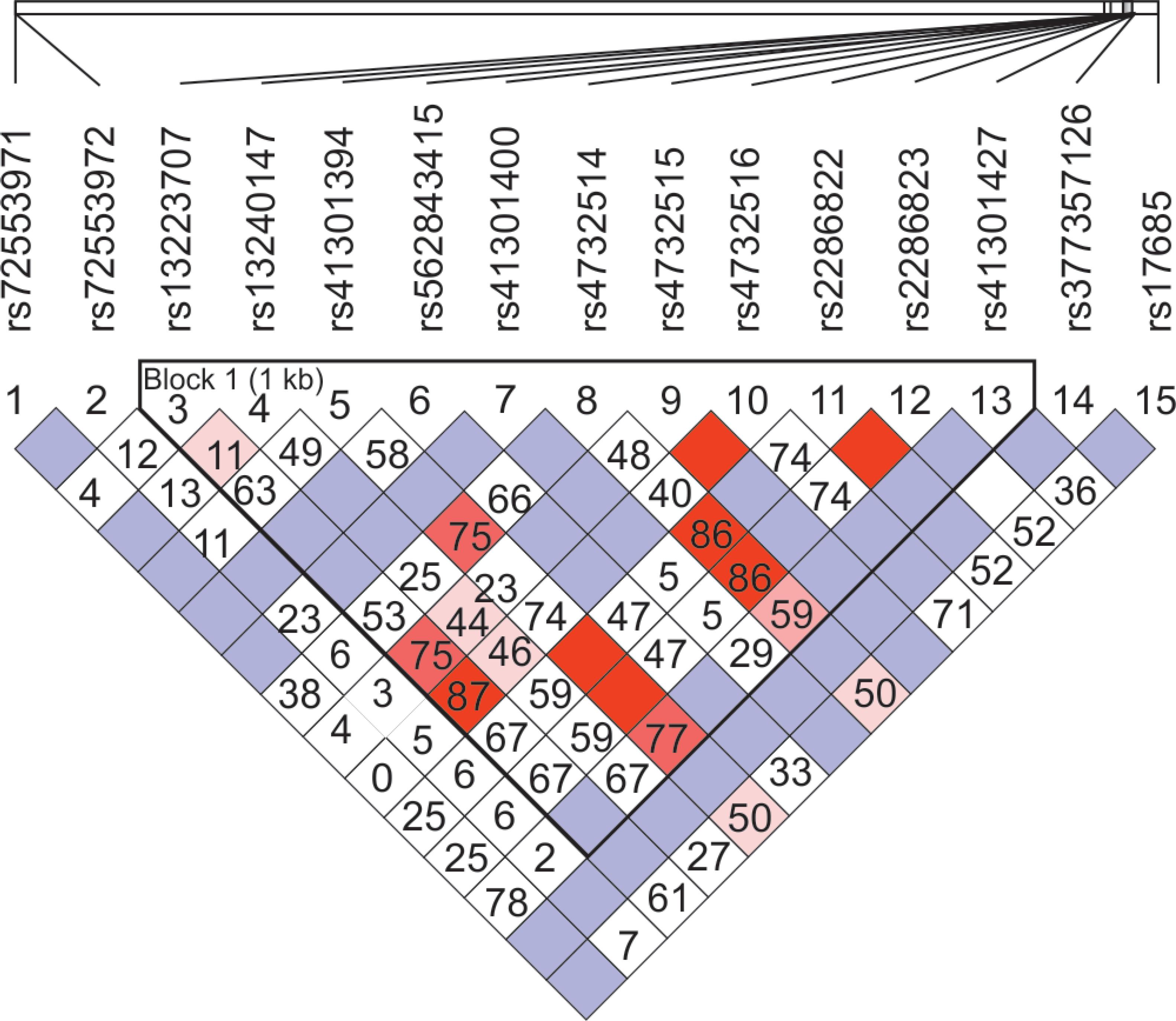 LIMITATIONS OF THE STUDY

In this study, we identified 15 intronic variants in the POR gene-targeted regions. Based on the linkage disequilibrium profile, the analyzed region was mentioned into blocks. This is the first study to provide information on POR gene-targeted region polymorphisms and associated LD plot in a South Indian population. The findings of this article will be useful for future pharmacogenetic, epigenetic studies and also to analyze the interindividual differences in drug metabolism of the CYP activity.

We would like to thank Sri Balaji Vidyapeeth (Deemed to be University) for providing basic infrastructure facility. I personally thank Dr Benet Bosco Dhas D for his timely guidance and help to improvise the manuscript.