“Binswanger disease” is a controversial eponym frequently used to indicate a form of vascular dementia characterized by white matter rarefaction and lacunar infarcts. Clinical features of Binswanger disease are variable, and the psychiatric manifestations have been less well described. We report a case of a 78-year-old female presenting with 3-month history of precognitive experiences, hallucinations in multiple modalities, inappropriate behavior, insomnia, and deterioration in self-care. Patient is a known case of hypertension and has a past history of multiple transient ischemic attacks. Mini-Mental State Examination, Montreal Cognitive Assessment, and Frontal Assessment Battery showed significant dysfunction. Neuropsychiatric inventory confirmed presence of psychopathology. Salient findings on magnetic resonance imaging brain included cerebral atrophy, chronic white matter ischemic changes, and multiple lacunar infarcts. The patient was prescribed second-generation antipsychotic along with cholinesterase inhibitor, NMDA receptor antagonist, and an antihypertensive. The patient improved with regard to psychotic symptoms and insomnia and is attending regular follow-up.

Vascular dementia is the second most common form of dementia, the first being Alzheimer’s disease. The eponym “Binswanger disease” (progressive vascular leukoencephalopathy) is used to indicate a form of vascular dementia characterized by white matter rarefaction and lacunar infarcts.1 In all, 4% of the general population, and 35% of dementia patients show characteristic lesions of Binswanger disease on autopsy.2 The clinical features of Binswanger disease are highly variable, and the psychiatric and behavioral manifestations have been less well described.1 Four symptom clusters have been described, namely, late-onset paranoid psychosis, confusional state, depression, and a behavioral syndrome of the frontal lobe type.3 However, the historical usage of this term has rendered it controversial.2

A 78-year-old female, divorced twice, Caucasian, was living alone in Puducherry, India, for the past 11 years. She was brought to the outpatient unit of the Department of Psychiatry of a tertiarycare hospital in Puducherry by her daughter who lives in England. The patient was also accompanied by a well-wisher who was a manager of the hotel where patient has been residing for the past 5 years. The patient was seen over a period of 5 months (May to September 2017) with only 8 visits during that time.

The patient came to Puducherry 11 years ago after her son was allegedly murdered. She came for his last rites and to seek justice in this regard. Although she had a goal, she was not able to take concrete steps regarding the same, and nothing has been achieved till date. She fails to acknowledge that her long stay is futile.

The patient presented with an illness of insidious onset, several years’ duration, progressive course with worsening over 3 months. The chief complaints were irritability and aggression, belief of precognitive ability, hallucinations in multiple modalities, decline in memory, insomnia, deterioration in self-care, and poor bladder control. She also refused to go back to her country of origin to reunite with her family. The patient denied all complaints and stated that she was “absolutely fine” and had no physical or mental illness, which was not in keeping with reality. The patient is a known case of hypertension for the past 40 years and on irregular treatment. In the past, the patient has had multiple transient ischemic attacks (TIAs) and several surgical procedures (appendicectomy, cholecystectomy, hysterectomy, bowel-bladder conduit, jaw surgery, bilateral knee replacement, right hip replacement, incisional hernia repair). The patient consumes alcohol on and off and has smoked tobacco in the past.

On examination, she was oriented to time, place, and person. No major abnormality was detected on cardiovascular, respiratory, and abdominal examination. Central nervous system examination revealed an apraxic gait. Mental status examination revealed a very friendly, jocular attitude, and the patient was disinhibited. Her affect was cheerful and inappropriate. She had a firm belief that she has precognitive ability (reports of being able to predict future events). She also had a delusion of grandiosity. She also had perceptual abnormalities, namely, second-person auditory hallucinations, visual hallucinations, and olfactory hallucinations. She completely lacked insight and had impaired personal and social judgement. Mini-Mental State Examination (MMSE) revealed a score of 17/30 (>24: normal; 23–19: mild; 18–10: moderate; %3C;9: severe), and montreal cognitive assessment (MoCA) showed a score of 11/30 (%3E;26: normal) with deficits in visuospatial ability, complex attentional tasks, language ability (fluency and naming), immediate and delayed memory, and abstract ability. Frontal lobe assessment battery (FAB) showed significant impairment in executive functions, such as, verbal fluency, sensitivity to interference, and inhibitory control. Neuropsychological assessment showed significant cognitive dysfunction in language, attention, memory, and executive functioning. Neuropsychiatric inventory (NPI), a report given by the patient’s caregiver, confirmed the presence of delusions, hallucinations, aggression, and irritability.

A diagnosis of major neurocognitive disorder due to vascular disease, with behavioral disturbance (psychotic symptoms and mood disturbance)—mild to moderate severity, based on DSM-5. A diagnosis of Binswanger disease was considered in view of hypertension, history of multiple TIAs, smoking, psychosis, cognitive and memory dysfunction, gait disturbance, poor bladder control, and typical radiological findings.

The patient did not have a consistent caregiver due to which there was a lack of supervision for medications, leading to poor and uncertain compliance. Also, there was only one visit with a family member who stayed with the patient for only 5 days. There was poor cooperation from the patient, as she believed she did not need treatment due to which follow-ups were irregular, and cognitive assessment could not be repeated.

Despite the difficulties faced in the management, there was an improvement with respect to the patient’s irritability and aggression, behavioral disturbances, insomnia, and self-care. Her conviction in precognitive ability reduced. The hallucinations in multiple modalities also subsided. However, the patient continued to be inappropriately cheerful and had impaired judgement. She lacked insight and refusal to reunite with family in England, despite persuasion from family members and well-wishers. 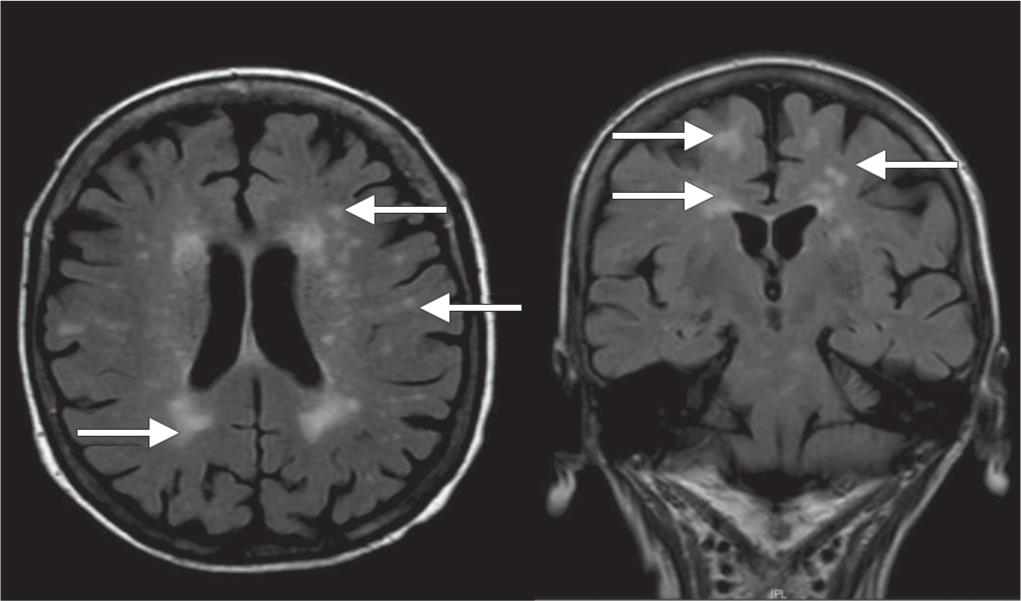 The diagnosis of Binswanger disease was made based on historical, clinical, and radiological information.4 At baseline, the psychotic symptoms were more florid than the cognitive decline. Literature review did not reveal published reports describing similar psychopathology in Binswanger disease. Thus, this case may be considered unique.

The patient had a belief of precognitive ability, which is not frequently encountered in clinical practice. Precognitive ability is a type of Psi phenomena which is an anomalous process of information and/or energy transfer that cannot be explained in terms of known biological or physical mechanisms.5,6 Psi phenomena include the following:5,7 (a) Precognition—Perception of a future event that cannot be anticipated through any known inferential process; (b) Extrasensory perception—Response to external stimuli without known sensory contact; (c) Telepathy—Transference of thought from one person to another without mediation of any known channel of sensory communication; (d) Clairvoyance—Perception of events or objects that do not provide stimulus to the known senses; (e) Psychokinesis—Mental influence over physical events without the intervention of any known physical force.

In this case, bilateral frontal atrophy and subcortical white matter infarcts, leading to disruption of frontal-subcortical circuits, which could explain the complex presentation. For a deeper understanding of the pathology, Binswanger disease is a diffuse demyelination of white matter with lacunar lesions in the basal ganglia and brainstem and the structural damage and or involvement of the neurotransmitter systems may be causal in producing the symptoms.3 Neurobehavioral changes could also be an outcome of frontal damage but have also been observed with lesions in other parts of the brain.3 Linking the frontal lobe and other subcortical structures are a series of parallel fronto-subcortical circuits.3

In the management of our patient, we faced challenges, such as there was no consistent care-giver, lack of supervision for medications, issues related to medication compliance, irregular follow-ups and poor cooperation from the patient. 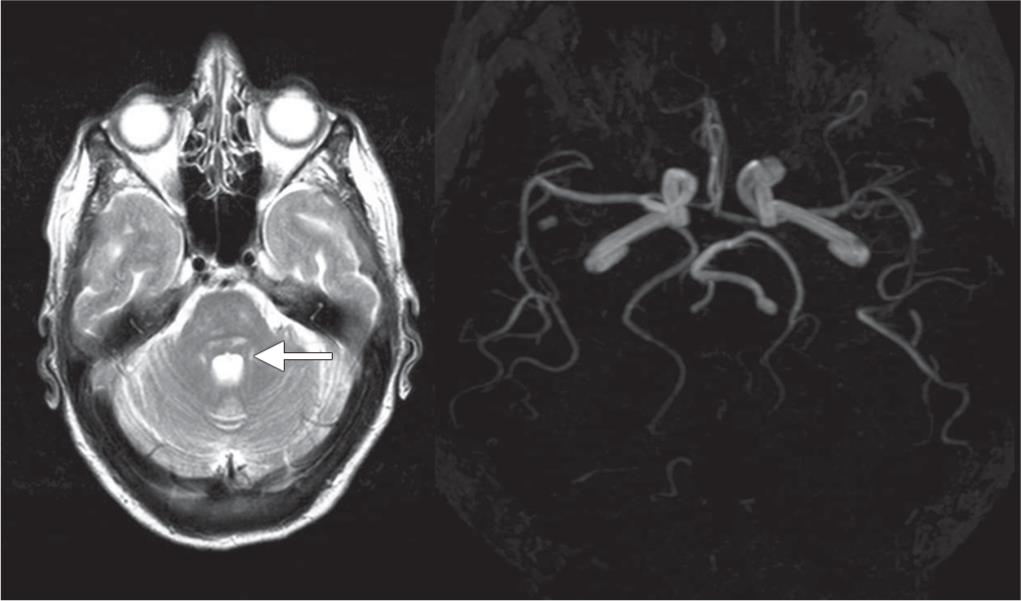 Neurocognitive disorders should always be considered in the differential diagnosis of mental and behavioral symptoms, manifesting in an elderly individual.8 Timely diagnosis and management of behavioral symptoms in dementia can have a positive impact on the overall outcome.

The impact of isolation and deficit in the support system could have influenced the overall physical and mental morbidity in this patient and the course of the illness. A study showed older persons’ satisfaction with the emotional support available to them is associated with better self-reported health status.9 Therefore, emphasis needs to be laid on the enhancement of support systems for the geriatric population.10