Single-layer versus Multiple-layer Closure after Postaural Tympanoplasty: A Comparative Study

Various methods of wound closure are described in the literature which include single- or double-layer closure, closure with staples, etc. Most surgeons prefer to close the postaural incision in two or three layers. Initially, the periosteum and soft tissue are closed with an absorbable material, and finally, the skin is closed with a nonabsorbable material, like silk. It prolongs the duration of the surgery as suturing is done in multiple layers and also increases the cost for the patient in terms of extrasuture material. Few surgeons close the postaural wound in a single layer, where the soft tissue and skin are closed in a single layer with a nonabsorbable material which saves both time and suture material, thereby reducing the cost of the surgery as well. Very few studies have been conducted in the past which compare the efficacy of either of the procedures. Here, we have studied to compare the efficacy of closing the postaural incision in single (nonabsorbable) and multiple layers (deep absorbable and superficial nonabsorbable suture). Ours is a tertiary care hospital in rural Puducherry, where most of the patients are from the lower socioeconomic class and hence, even minor cost variation makes a great way in patients’ decision to undergo surgeries.

Finding out the time taken for wound closure after a tympanoplasty surgery when the wound is closed in a single layer vs multiple layers and the incidence of postoperative complications like hematoma, wound dehiscence, secondary infection, and hypertrophic scars in patients who undergo single- vs multiple-layer closure after a tympanoplasty surgery were the objectives of the study.

This study was conducted in the Department of ENT and Head and Neck Surgery in a tertiary care hospital in Puducherry from October 2018 to March 2020. Data were collected from patients who presented to the Outpatient Department of ENT and Head and Neck Surgery with a diagnosis of chronic suppurative otitis media (CSOM) of tubotympanic type. The study included 100 patients who had CSOM of tubotympanic type in the age-group of 10 to 60 years, who underwent tympanoplasty by a postaural approach by the same surgeon. Patients with revision surgery and mastoidectomy surgery, patients undergoing surgery by an endaural or endomeatal approach, and patients with diabetes mellitus and chronic smokers were excluded from the study. The study population was divided by simple randomization into two groups of 50 each. The incision in the first group (group I) was closed in a single layer with a nonabsorbable suture material. The incision in the second group (group II) was closed in multiple layers (deep absorbable and superficial nonabsorbable suture). Written informed consent for surgery and to take part in the study was taken from all participants.

A total of 100 patients who match the inclusion and exclusion criteria were studied. All patients were operated by a postaural approach using William Wilde’s incision and a small 1 cm extension superiorly for harvesting the temporalis fascia graft.

Patients were admitted one day prior to surgery. All routine preoperative investigations were done and a preanesthetic checkup was carried out. All patients received two prophylactic doses of IV cefuroxime on the day of surgery.

All surgeries were done under general anesthesia with orotracheal intubation. Local infiltration was given in 1 in 1,00,0000 xylocaine with adrenaline in the postaural groove and graft area. A standard William Wilde’s incision was given 0.5 cm behind the pinna with a #15 blade which was extended 1 cm superiorly over the temporal region for harvesting the temporalis fascia graft. The incision was deepened with complete control of bleeding and the surgery was carried out. The incision in group I was closed in a single layer with a nonabsorbable material (3-0 Ethilon) with 8–10 mattress sutures put at a distance of approximately 0.5 cm. The incision in group II was closed in two layers. Soft tissues were sutured first by simple sutures with an absorbable material (3-0 Vicryl) and 8–10 mattress sutures with a nonabsorbable material (3-0 Ethilon) were put at a distance of approximately 0.5 cm to close the skin. Once the suturing was completed, the wound was cleaned with a betadine-soaked gauze and subsequently by a saline-soaked gauze, and Mupirocin ointment was applied. A mastoid bandage was applied for all patients and kept in situ for a period of 2 days followed by postaural ear dressing for 7 days.

All patients were given analgesics, proton pump inhibitors, antihistamines, and multivitamins. No antibiotics were given after the day of surgery. The sutures were removed on the 7th postoperative day. The wound was checked for wound gaping, discharge, collection, scar dehiscence, and skin overlap on the 7th day after surgery, 2 weeks after surgery, and at the end of 2 months.

There was an almost equal distribution of both sexes in this study with a slight female preponderance with 52% of females over 48% of males (Table 2).

It was found that most patients presented in the second decade of life (42%). Only four patients in the study were over the age of 50 years (Table 3).

Wound dehiscence, which is a gross separation of wound margins, was seen in three patients, of which two patients were in group I and one patient in group II (Table 4). It was managed conservatively with daily tight sterile ear dressings and none of them required secondary suturing. Secondary wound infection was seen in one patient in both groups which was treated conservatively with antibiotic ointment and local dressing with powdered metronidazole tablets. One patient in group II had a hypertrophic scar on review after 2 months. None of the patients had postoperative hematoma in the immediate postoperative period.

As per the literature, an incision should be closed in layers. Each layer should be individually approximated with the best-suited suture material. The closure should be from periosteum to periosteum, soft tissue to soft tissue, and skin to skin. The skin heals faster whereas the subcutaneous layers take up to 2 months for complete closure, depending on the site.1

In hair restoration surgeries, there have been controversies over the effectiveness of single vs double-layer closure of the donor strip. There are certain pros and cons for each closure technique. Wound closure in double layers reduces the tension on the wound margins and decreases the dead space, thereby helping in better wound healing.2 The postaural incision closure is more for support rather than for strength, unlike in abdominal wounds. In our study, we had only four patients above the age of 60, which can probably be due to the reduced rates of surgical management by tympanoplasty in the elderly age-group. Since wound healing can be affected as age advances, this can be considered as a possible drawback of our study.

Wound dehiscence and secondary infections are complications of any wound closure. Multifilament braided materials have the potential risk of bacterial infection as they draw in surface an infection through capillary action and because of the risk of bacterial inocula between the braids. An absorbable suture material like Vicryl is preferred over catgut as the former gets completely hydrolyzed and the latter stimulates polymorphonuclear inflammation. In our study, one patient in either group had secondary wound infections. Two patients in group I who underwent a single-layer closure developed wound gaping on the 7th postoperative day and one patient in group II developed wound dehiscence on the 7th postoperative day which was not statistically significant.

It was found that single- and multiple-layer wound closures were equally good for a tympanoplasty surgery by a postaural approach, and the single-layer closure had an added advantage of reduced overall cost and the duration of surgery. It was also found that the cost of the suture material can be reduced to one-third if the wound is closed in a single layer (Figs 1 to 3). 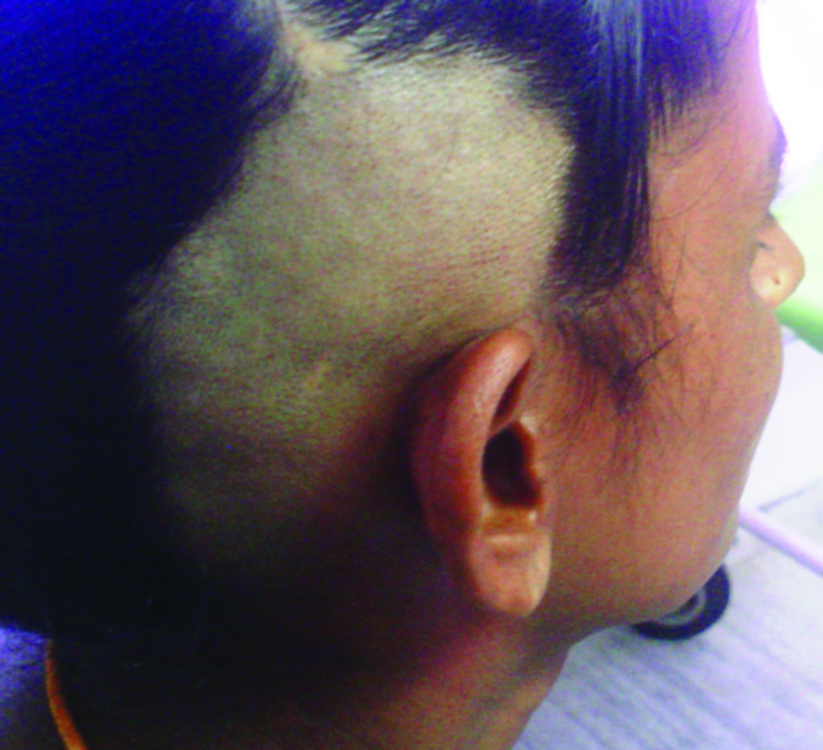 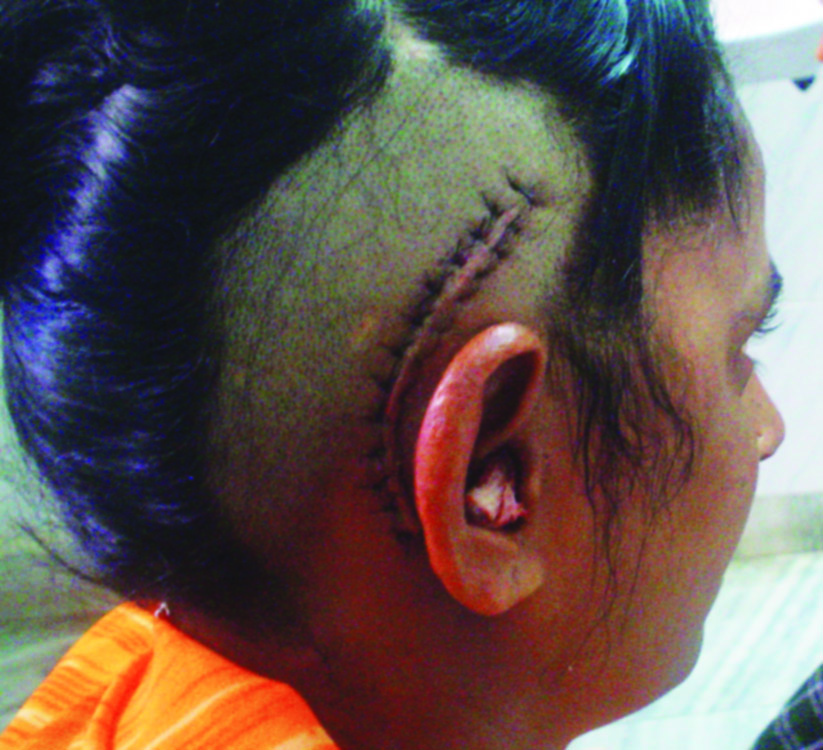 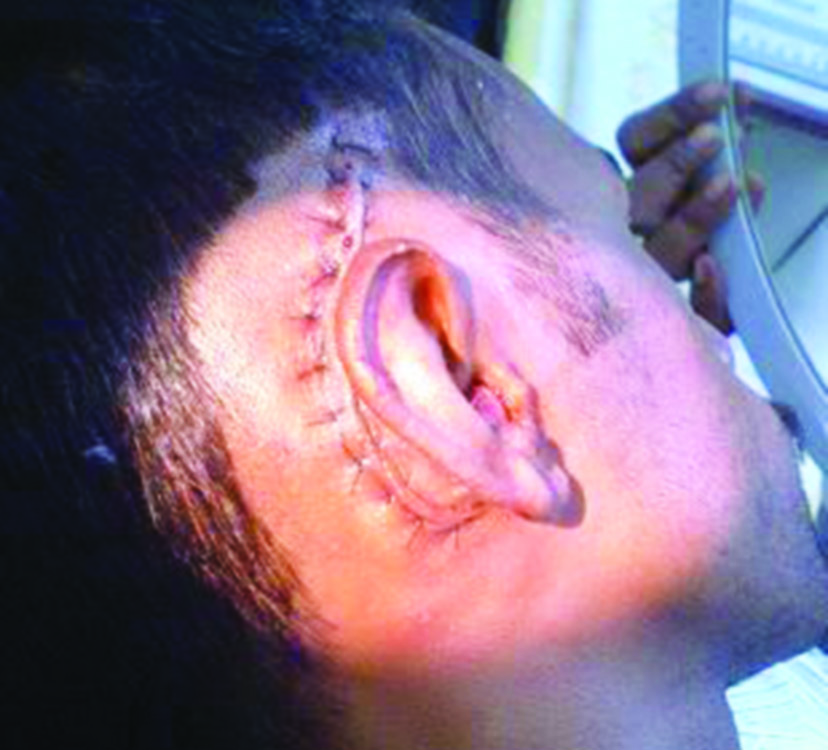