Aim and objective: The purpose of this study was to assess the 2% chitosan mouthwash on plaque reduction in comparison with 0.2% chlorhexidine mouthwash among young adults in Puducherry.

Materials and methods: A triple-blinded crossover randomized controlled trial was conducted among 20 first-year dental students, residing at college hostel in Puducherry. The subjects were randomly allotted to two groups (group I: 2% chitosan mouthwash and group II: 0.2% chlorhexidine mouthwash) with 10 subjects in each group. The plaque index proposed by Silness and Loe in 1967 was used for the assessment of plaque accumulation at baseline and 1 week after using mouthwashes. After a washout period of 30 days, mouthwashes were exchanged between the two groups, and plaque index was recorded. Data were assessed using an independent t-test and paired t‐test.

Results: A significant reduction in plaque index scores was observed from baseline to 1 week following intervention (p <0.05) in both the groups during both phases. However, there was no significant difference between the two groups in plaque reduction (p >0.05).

Gingivitis is the mildest form of periodontal disease characterized by inflammation and bleeding of gingiva without loss of underlying alveolar bone.1 The main etiological agents responsible for the initiation and progression of gingivitis are local factors namely dental plaque and calculus.1 Dental plaque is defined clinically as a structured, resilient, yellow-grayish substance that adheres tenaciously to the intraoral hard surfaces, including removable and fixed restorations.1 Gingivitis can be easily controlled and prevented by effective plaque control measures implemented on a daily basis.2

Chitosan (CH), a natural polysaccharide obtained by the deacetylation of N-acetyl glucosamine, has received much more attention as a chemical agent for mouthwashes that provide clinical benefits for plaque control.5 In addition to its favorable properties, such as nontoxicity, biocompatibility, and biodegradability, CH has an extended retention time on the oral mucosa.6 Hence, this study was aimed to assess and compare the efficacy of chitosan mouthwash with chlorhexidine on dental plaque among young adults in Puducherry.

A triple-blinded randomized controlled trial with crossover design was carried out among randomly selected 20 first-year dental students, residing at college hostel in Puducherry. All the subjects included in the trial were dentate with minimum 20 teeth and periodontally healthy. Patients with a history of previous antibiotic therapy or periodontal therapy in the past 6 months, missing permanent first molars, first premolars, and/or incisors, systemic diseases, hypersensitivity to mouthwashes, pregnant women, and tobacco users were excluded from the study. The present study was conducted by the guidelines for good clinical practice and with the Helsinki Declaration of 1975, as revised in 2000. The protocol was approved by the Institutional Ethical Committee of Indira Gandhi Institute of Dental Sciences, Puducherry, and all the patients provided written informed consent to participate in this study.

A pilot study was conducted among 10 patients (five patients in each group) who satisfied the inclusion criteria to assess the feasibility and sample size for the main study. Sample size estimation was made taking into account the mean difference in plaque index scores. Using a sampling software, (G power version 3.1.9.2, Heinrich–Heine–Universitat-Dusseldorf, Germany) minimum sample size was calculated to be 10 patients in each group (power 90% and α error at 5%). A single examiner performed the clinical examination who was calibrated before the pilot study, and the intraexaminer reliability was assessed (Cronbach’s α = 0.87).

Information on intervention allocation was placed in opaque envelopes and patients were asked to choose one envelope randomly. An independent investigator noted the group allocation of each patient, to which the chief investigator was blinded. Intervention allocation was revealed only after the data analysis was completed. The study subjects were allocated randomly into two groups, each group consisting of 10 subjects. In the first phase, subjects in group I were provided with chitosan mouthwash and group II with 0.2% chlorhexidine gluconate. The interventions were masked by dispensing them into identical cleaned, opaque amber plastic bottles with appropriate labeling done to avoid patient bias.

At baseline, plaque index proposed by Silness and Loe in 19677 was used for the assessment of plaque accumulation. All the subjects underwent ultrasonic scaling before giving the intervention. Subjects in the two groups were advised to use 10 mL of respective mouthwash undiluted for 1 minute once a day before having breakfast. Subjects were assessed again after 1 week for recording plaque index. After a washout period of 30 days, mouthwashes were exchanged between the two groups where in group 1 received 0.2% chlorhexidine mouthwash and group 2 received chitosan mouthwash. Plaque index was recorded in both the groups and similar instructions were given to use the mouthwash. Again after an interval of 1 week, subjects were followed up and plaque index was recorded. All the patients received oral hygiene instructions along with an oral hygiene kit containing a soft‐bristled toothbrush and fluoridated toothpaste during the study. The data obtained was arranged in a master chart and subjected to statistical analysis.

Statistical analysis was carried out using the statistical software SPSS version 16 (IBM corp., Chicago, USA). Intergroup comparison of demographic data was carried out using Pearson’s chi-square test. Quantitative data comprising clinical and microbiological parameters were tested for normality using Shapiro–Wilks test and were found to be parametric in distribution. (p >0.05). A paired sample t-test was used for intragroup comparison and an independent sample t-test was used for intergroup comparison in this study. A value of p <0.05 was considered as statistically significant.

All the 20 subjects participated throughout the entire span of the study. No patients were excluded due to lack of compliance with or intolerance to either treatment regimen (Flowchart 1). The demographic distribution of subjects in the two treatment groups has been revealed in Table 1. 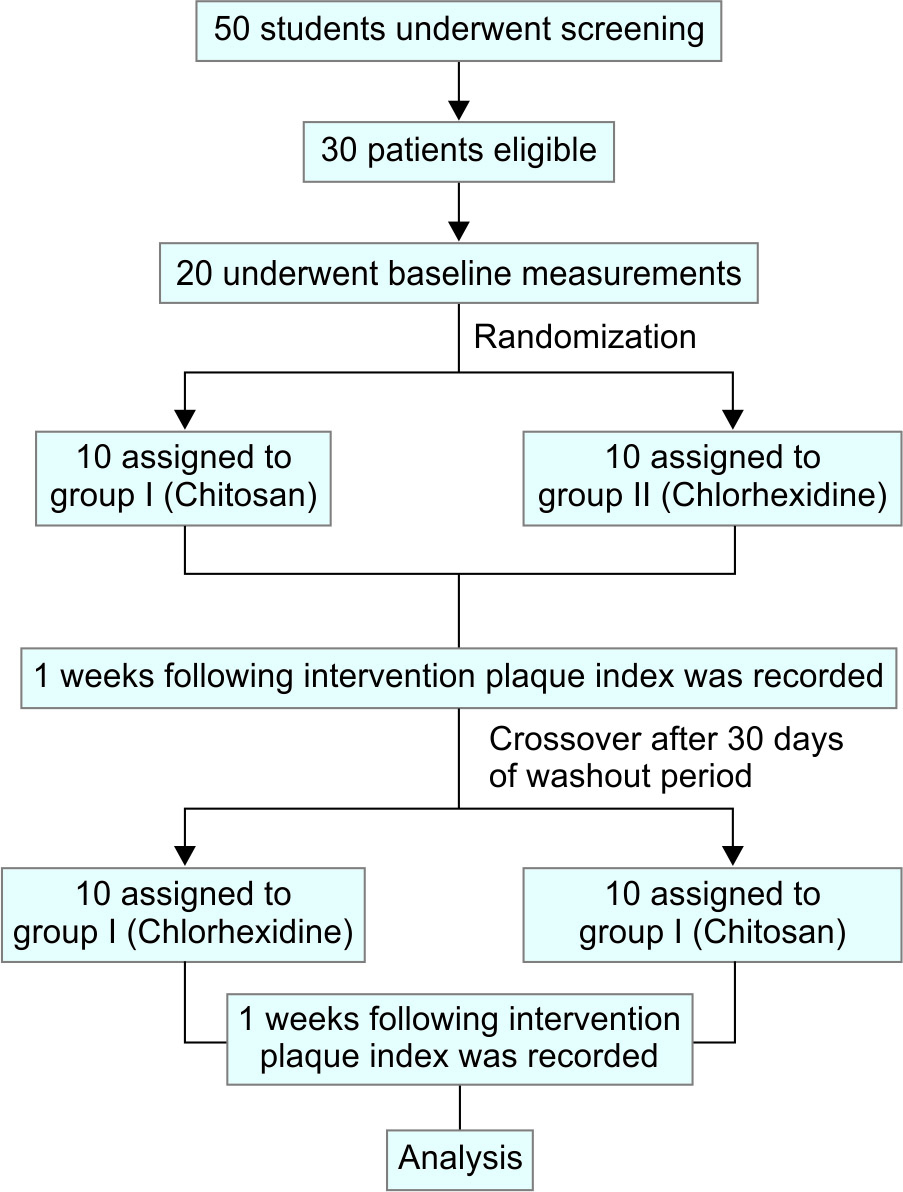 Flowchart 1: Study design from screening to completion of the trial

A significant reduction in plaque index scores was observed in the two treatment groups individually between two time frames (baseline vs 1 week) during phase 1 and after crossover as well (Table 2). However, the mean reduction in plaque index scores from baseline to 1 week after the intervention was found to be significantly higher in chitosan mouthwash group than chlorhexidine group before and after crossover (Table 3).

The aim of this clinical study to investigate the clinical efficacy and effectiveness of a water-soluble form of 2% chitosan in a mouth rinse to act against plaque microorganisms and compare with 0.2% chlorhexidine mouthwash. In the present study 20 first-year dental students who were residing in the college hostel were selected. This helped in the standardization of the diet of the subjects on a daily basis.

Chlorhexidine (CHX) digluconate has served the dental profession for over three decades as an excellent antiplaque and antibacterial agent.8 The bacteriostatic and bactericidal effect of chlorhexidine along with its substantivity makes it the gold standard chemical plaque control agent.9 Hence, chlorhexidine was used as the positive control in this study to compare the effect of 2% chitosan mouthwash against dental plaque.

Results of this study indicated that chitosan mouthwash and chlorhexidine mouthwash had equal effects on plaque accumulation. Decker et al. from their study suggested that the combination of chlorhexidine with chitosan is more effective in plaque control.10 Costa et al. concluded that chitosan is effective against most of the microorganisms and they suggested it as an alternative to traditional mouthwashes.5 Costa et al. stated that the antiplaque effect of chitosan is because of its antiadhesive properties toward microorganisms. Some researchers also stated that chitosan can be used effectively in dentifrices to improve oral hygiene, since it reduces plaque by 70%.11 Previous literature and results from our study favor the possibility of using chitosan as an alternative chemical agent for managing patients who show side effects associated with chlorhexidine.

Nowadays chitosan has established itself as a high sought material due to its biocompatibility, reduced toxicity, and high percentage of amino groups that confer its specific functionalities, including antimicrobial activity and acceleration of wound healing, and studies into chitosan’s applicability have shown chitosan’s potential and feasibility.6 Furthermore, due to chitosan’s nature, there are no reports of known antimicrobial resistance to chitosan.6 With these characteristics chitosan appears to be a perfect match for usage in oral care products. Chitosan may be an alternative chemical agent for managing patients who show side effects associated with chlorhexidine; moreover, one has to consider the importance of natural products, without any side effects. Further research with the placebo group and combined chlorhexidine and chitosan mouthwash will help us better to know about the efficiency of chitosan in plaque reduction. Shorter duration follow-up and inability to conduct microbiological analysis of plaque samples could be listed as few limitations of our study.

In summary, this study suggests that 2% commercially available chitosan mouthwash showed a significant plaque reduction and is equally effective as 0.2% chlorhexidine mouthwash.

The authors are thankful for all the participants in this study.