A Rare Case of Eight-and-a-half Syndrome: A Case Report

“Eight-and-a-half syndrome” is a rare entity comprising conjugate horizontal gaze palsy, ipsilateral internuclear ophthalmoplegia (INO), and ipsilateral lower motor neuron type of facial palsy, arising due to a lesion affecting the paramedian pontine reticular formation (PPRF), medial longitudinal fasciculus (MLF), and the ipsilateral facial nerve. Dr. Fischer first described the “one and a half syndrome,” which is much more common in occurrence. It is due to a lesion involving the same side of PPRF, abducent nerve nucleus, and the MLF. Since the motor division of the seventh nerve nucleus winds around the motor nucleus of the sixth nerve at the level of the pons, slightly more extensive lesions in the form of infarct and hemorrhage may involve the seventh nerve also leading to this rare entity called the “eight-and-a-half syndrome.”

“Eight-and-a-half syndrome,” first described in 1998 by Eggenberger,1 is a rare entity comprising of conjugate horizontal gaze palsy, ipsilateral internuclear ophthalmoplegia (INO), and ipsilateral lower motor neuron type of facial palsy, arising due to lesion affecting the paramedian pontine reticular formation (PPRF), medial longitudinal fasciculus (MLF), and the ipsilateral facial nerve. It occurs due to a lesion involving the same side of PPRF, abducent nerve, and the MLF, in rare cases the motor division of the seventh nerve as it winds around the motor nucleus of the sixth nerve at the level of the pons.2 Hence, more extensive lesions in the form of infarct or hemorrhage in this region may involve the seventh nerve also leading to this rare entity called the eight-and-a-half syndrome. INO are a group of disorders involving the MLF that connects the third and sixth cranial nerve nuclei at the level of the brain stem. INO is usually caused by demyelination, infarct, and tumors and occasionally by hemorrhage. It is one of the causes of horizontal gaze palsies.

A 62-year-old male patient with type 2 diabetes mellitus presented with an inability to close the left eye. He noted a sudden onset of binocular diplopia on the right gaze for 5 days. On ocular examination, the following clinical signs were elicited:

There was horizontal gaze palsy to the left. In the right gaze position, there was a limitation of adduction of the left eye, and an “abducting nystagmus” (ataxic nystagmus, overshoot dysmetria) was seen in the right eye.

The patient was referred from the medicine outpatient department (OPD) as a case of lower motor neuron type of facial nerve palsy; however, on examination, a horizontal gaze palsy was elicited, which had all the clinical features of the Fischer’s one-and-a-half syndrome, involving the left-sided MLF, PPRF, and the abducent motor nucleus.

Superimposition of the LMN type of facial nerve palsy with the one-and-a-half syndrome is a very rare occurrence, and we could find very few reports in the literature. This occurs due to an extensive lesion at the level of the pons that has involved the facial nerve along with the MLF and the PPRF of the same side. A subsequent investigation by computerized tomography scan showed the presence of a large infarct at the level of the pons that accounted for this condition. The patient was treated in the Ophthalmology Department with artificial tear substitute eye drops frequently (6−10 times per day), taping of eyelids at night, and physiotherapy. The patient was referred to a neurologist for further management and advised to control his diabetic status.

The diagnosis of the eight-and-a-half syndrome was made based on historical, clinical, and radiological information.

It is seen due to demyelinating conditions, such as multiple sclerosis; other causes are ischemia and infarction.

In rare cases, it may be due to cavernomas or hemorrhage in thebasilar artery territory or a space-occupying lesion at the level of the pons, such as a tuberculoma.

Horizontal gaze control starts at the prefrontal cortex. From here, it crosses over to the opposite side of PPRF and through the PPRF to the ipsilateral abducent nucleus at the level of the pons. At the level of the brainstem, the MLF coordinates and connects the third nerve nucleus of the ipsilateral side to the contralateral sixth nerve nucleus. Thereby causing smooth horizontal conjugate gaze movements3 (Fig. 2). 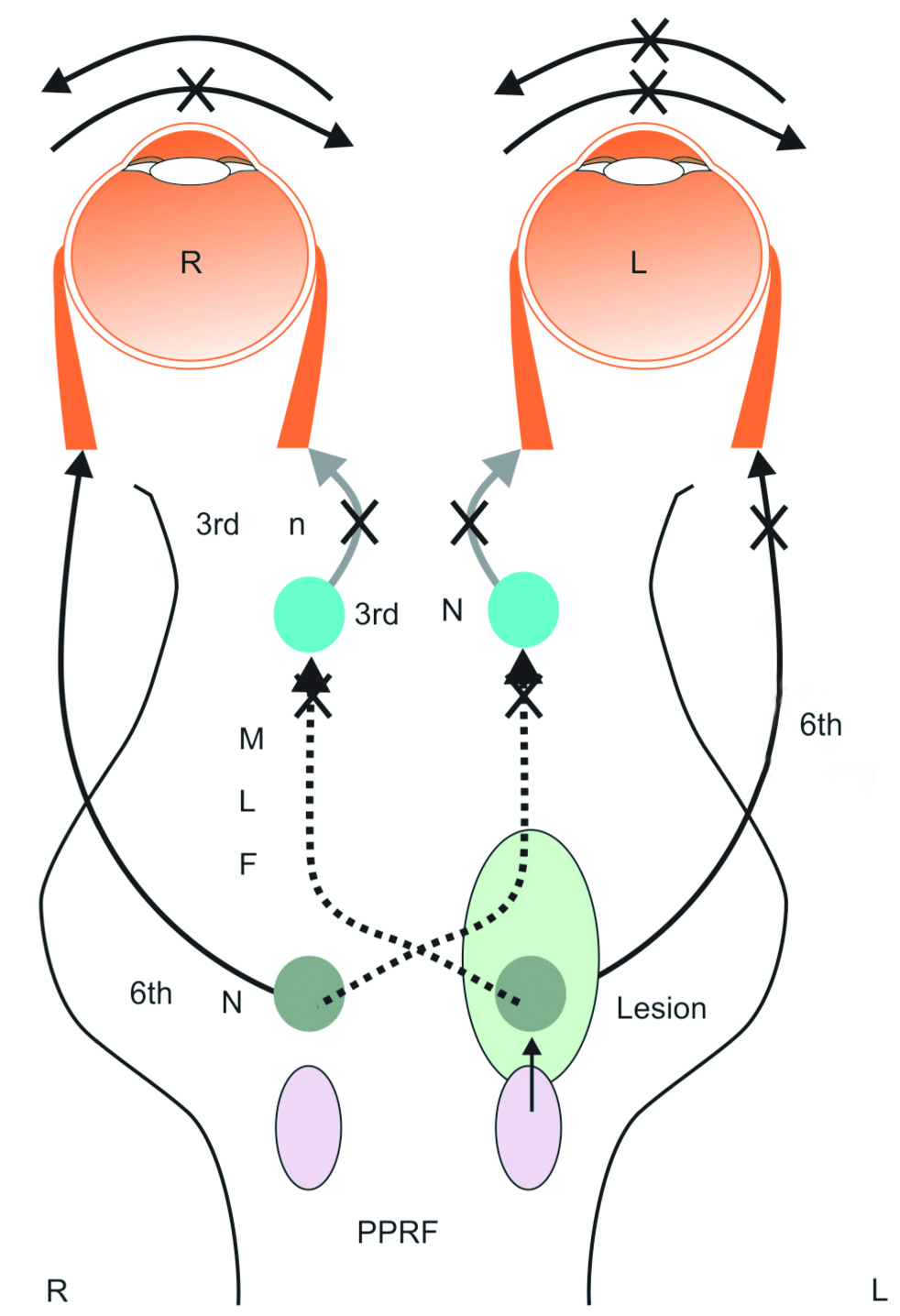 Fig. 2 Diagram shows the mechanism for one-and-a-half syndrome. Pathologic lesion (oval-shaded area) in the dorsal pontine tegmentum involves both ipsilateral PPRF (or the abducens nucleus) and the ipsilateral MLF4

In INO, the MLF is affected either by demyelination or by infarct,5 leading to limitation of adduction on the same side and abducting nystagmus of contralateral eye while the opposite gaze is normal.6

In lesions involving the PPRF, there is a defective horizontal gaze to the same side, whereas the gaze of the opposite side is intact.7 So, Dr. Fischer described a syndrome known as one-and-a-half syndrome that involves the same side of MLF and PPRF,8 and so, the features of one-and-a-half syndrome are (i) ipsilateral gaze palsy on contralateral gaze, (ii) defective adduction of ipsilateral eye, and (iii)abducting nystagmus of the contralateral eye.

A lesion that involves the same side of MLF, PPRF, abducent nerve, and the motor root of the facial nerve as it winds around the sixth nerve that leads to a syndrome is called as a eight-and-a-half syndrome (Fig. 3). 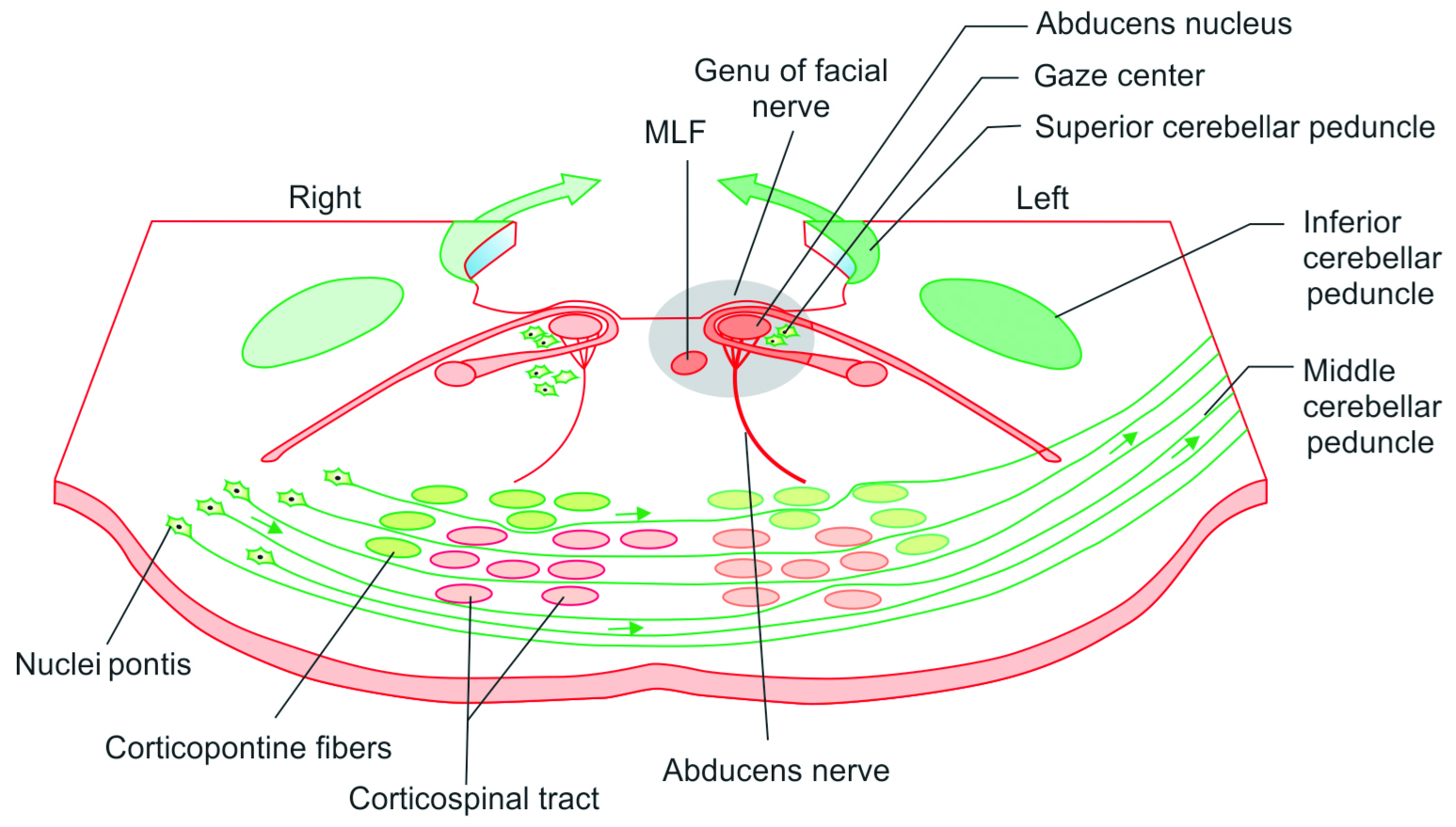 Fig. 3 This figure shows the anatomical location of the lesion responsible for eight-and-a-half syndrome (round shadow). Involvement of the left abducens center explains the left horizontal gaze paresis, while the lesion at the left MLF results in an INO when attempting a right gaze (the left eye cannot adduct, and the right eye shows horizontal nystagmus). This clinical combination is known as one-and-a-half syndrome, and additional involvement of the facial nerve genu explains the ipsilateral facial palsy9

A high degree of clinical suspicion is required to diagnose the “Eight-and-a-halfsyndrome,” as most of the patients are referred for an LMN type of facial nerve palsy as this is the most visible component of the condition. In addition, patients rarely complain of diplopia in horizontal gaze palsies, and hence, the diagnosis may be missed. So, a mandatory extraocular movement testing should bedone in all patients with facial nerve palsy to pickup associated gaze palsies. The presence of one-and-a-half syndrome associated with LMN type of facial nerve palsy will help the physician to accurately pinpoint the lesion at the ipsilateral pontine level.